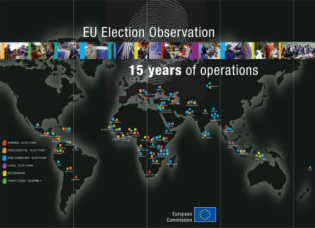 In response to an invitation by the Tunisian authorities, the European Union

has deployed its Election Observation Mission (EU EOM) to observe the upcoming elections in Tunisia.

Catherine Ashton, High Representative of the Union for Foreign Affairs and Security Policy and Vice-President of the Commission, appointed as Chief Observer Mrs Annemie Neyts-Uyttebroek, a Member of the European Parliament.
“The EU has received an invitation by the Tunisian authorities”, said Chief Observer Annemie Neyts. “The EU deployed an Election Observation Mission to Tunisia in 2011 and has been invited again to observe the upcoming elections in Tunisia. We are here to observe the elections and we will not interfere in the process in any way. I trust that this EU Observation Mission will be able to provide an important contribution to enhancing the inclusiveness and transparency of the election process in Tunisia. The mission complements the overall support of the EU to Tunisia in order to successfully advance its democratic transition”.

The EU EOM arrived with a Core Team of eight experts on 17 September in Tunis.A second group of 28 long-term observers will join EU EOM on 29 September and another 28 shortterm observers will be deployed on 21 October throughout the country together with a delegation of the European Parliament for the election days. Additionally, a significant number of locally recruited short-term observers from diplomatic representations of EU Member States in Tunisia will also take part in the observation plus observers from Canada, Norway and Switzerland.

The EU EOM will conduct a comprehensive analysis of the entire electoral process based on a long-term observation in line with domestic law as well as regional and international standards. This analysis will include aspects such as the legal framework, the performance of the election administration, the campaign activities of the candidates and political parties, the respect of fundamental freedoms, the conduct of the media, the voting and the counting, the complaints and appeals process, and the announcement of the results.

The EU EOM is bound by a code of conduct which does not allow any interference in the process. The EU EOM will publish its initial findings in a Preliminary Statement, which will be presented in a press conference about two days after the election days but prior to the completion of the entire electoral process. A final report will be published at a later stage, and will include recommendations, for consideration to the authorities, for possible improvements of future elections.

The EU provides substantial financial and technical assistance to Tunisia to support its transition in all domains. In the recent past months, to support the whole electoral process, the EU has also completed the signing of a Memorandum of Understanding with the Independent electoral commission (ISIE) and the independent High Authority for Information and audio-visual Communication (HAICA) and provided technical expertise to support the ISIE in its institutional and operational capabilities as well as HAICA in creating a media component of the electoral process. The EU also supports civil society in general and in its domestic observation and monitoring activities for future elections.
The European Union has signed Memoranda of Understanding with the Government and the ISIE, guaranteeing freedom of movement to all EU EOM members and access to all polling stations and related sites and bodies and to all relevant information. This Mission is independent from any EU institutions or Member States and is obliged to remain neutral and abide by the Declaration of Principles for International Election Observation and the Code of Conduct, as well as laws of Tunisia.