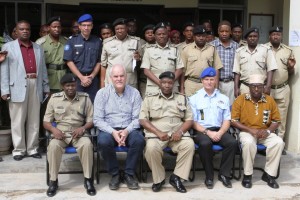 (di Anthony Brown) On 30 June, the European Union maritime capacity building mission, EUCAP Nestor, launched a two-week training on crime scene investigation and evidence handling for 12 officers from the Maritime Police and 4 of the Criminal Investigation Department of Zanzibar.

The opening ceremony for this training, took place in the Police Academy, in the presence of several high ranking officers and a representative of the Director of Public Prosecution.

From 30 June to 11 July, a training team from the European Union maritime capacity building mission, EUCAP Nestor, carried out a crime scene investigation and evidence handling training for 12 officers from the Maritime Police and 4 of the CID-unit, among which 2 female officers.

The training that will be carried out by experienced trainers from EUCAP Nestor, will take place from 30 June to 11 July at the Police Academy conference center in Stone Town, Zanzibar and will focus on the collection and handling of evidence.

When officers arrest suspected criminals, like smugglers or pirates, their action has to be lawful and the evidence has to be collected in a way that it can be used to prosecute and convict the criminal when brought to justice in Tanzania. The 16 officers will undergo two weeks of intensive theoretical and practical training.

“The identification of evidence, the proper handling, storing and administering of evidence are all necessary ingredients in making sure that prosecutors and judges can base their work on solid foundations” says the Commissioner of Police of Zanzibar, Hamdan Omar Makame representing the Deputy Inspector-General of Tanzanian Police at the opening ceremony. “I appreciate all the earlier efforts and welcome again the good cooperation between European Union initiatives like EUCAP Nestor, and our law enforcement agencies and I hope that there will be many more occasions to cooperate”

Since December 2013, EUCAP Nestor has deployed a liaison officer to Tanzania, currently hosted by the EU Delegation in Dar es Salaam. The training is the third one held by EUCAP Nestor in Tanzania, after a first in December 2013 and a second in February 2014.

“After first trainings carried out in Dar es Salaam in December 2013 and February 2014, EUCAP Nestor is now implementing another crime scene investigation training, this time on Zanzibar” says Eisso Kronenberg, EUCAP Nestor liaison officer in Tanzania. “Our work in general, and this training in particular, aims at increasing maritime security in the region, and I am glad to see the excellent cooperation and the overwhelming enthusiasm of my Tanzanian counterparts. I am looking forward to more joint activities in this area in the near future”

The mission is mandated to work with the main actors responsible for maritime security in each of the host nations. Typically this includes the Navy, the Coast Guard, Maritime Police, prosecutors, judges and other actors in this field. Mission experts provide advice, mentoring and training, which can include law drafting and development of organizational structures.

The strengthening of the regional capacity to counter crimes such as piracy, illegal fishing and illegal trafficking at sea reflects the common interest of Tanzania and the European Union to ensure peace and stability in the Horn of Africa and the Western Indian Ocean, to reduce the cost of trading throughout the region and, in the end, to sustain the economic development and the wellbeing of the citizens.

Background
EUCAP Nestor is a civilian EU mission, under the Common Security and Defence Policy, that assists host countries in the Horn of Africa and Western Indian Ocean region to develop a self-sustainable capacity for enhancement of the maritime security, including counter-piracy and maritime governance.