Home / In evidenza / Jordanian soldier killed on the Jordan-Syria border 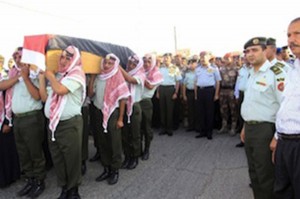 A Jordanian soldier killed late last night in a clash with militants trying to cross the Jordan-Syria border was laid to rest Monday in his home town of Tal Al Rumman in Balqaa Governorate.
The Jordan News Agency, Petra, said Chairman of the Joint Chiefs-of-Staff Gen. Mashal Al Zaben and other senior military officers and officials attended the funeral of Corporal Mohammad Abdullah Al Munasir, 25.
A Jordan Armed Forces (JAF) statement, emailed to The Jordan Times, said that soldiers guarding the border with Syria exchanged fire with two separate groups during the night.
“At 22:30 Sunday, a group of eight people attempted to cross the northern border illegally into Syria but were discovered by the JAF border guards who exchanged fire with them after they refused to submit to warnings by the JAF troops. Our troops captured the whole group and one of our staff fell martyr during the shootout,” the statement said, adding that the Armed Forces troops confiscated kalashnikovs and heckler & koch G3 rifles.
Two hours later, the statement said, army forces engaged in shootout with another group of five members who tried to cross the borders into Syria and injured one of them, adding that the militants were captured and the army confiscated their weapons.
Since the armed struggle broke out in Syria over a year ago, the military has intensified its presence at the border with the violence-hit neighbour.

Photo: Members of the Jordan Armed Forces carry the casket of Corporal Mohammad Abdullah Al Manasir during an official military burial ceremony in his home town of Tal Al Rumman in Balqaa Governorate on Monday. Manasir was killed in a shootout between the army and militants on Sunday night near the border with Syria (Petra photo)