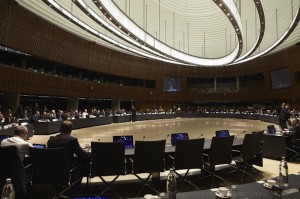 EU Justice and Home Affairs ministers will discuss in Luxembourg on October 7–8 key issues of data protection, fight against euro counterfeiting, free movement of persons, Syria refugee crisis and the sea tragedy outside of Lampedusa.
The Justice part, chaired by the Lithuanian Minister of Justice Juozas Bernatonis, will start with the discussion on one of the key issues in the proposal for a General Data Protection Regulation – the so called “one-stop-shop” principle. The Presidency will ask the Ministers for orientation on which of the proposed directions would bring most benefit for businesses and ensure efficient protection of the citizens’ rights in the EU internal market.
“The “one-stop-shop” principle would reduce some compliance costs ensuring that companies which operate across several member states will be supervised by the single supervisory authority in their home country. However, reducing financial burden for business should not affect the protection of individuals and this must be balanced,” said Minister Bernatonis.
The Lithuanian Presidency will also seek that the Council approves the agreement on the Directive on the Protection of the Euro and Other Currencies Against Counterfeiting by Criminal Law. It should make the European Monetary Union more secure by strengthening the protection of money in circulation or designated as legal tender through criminal law sanctions and improving cross-border judicial and law enforcement cooperation.
“The euro is used by 330 million people in 17 Member States and its counterfeiting affects honest citizens and companies. It must be uniformly protected in all European Union countries. Harmonization of the criminal law measures on the EU level will strengthen fight against these offenses. Legitimate interests of all those using the euro will be better safeguarded, citizens and companies will have more confidence in the authenticity of the euro banknotes and coins,” said Minister Juozas Bernatonis.
The European Commission Proposals on the Establishment of the European Public Prosecutor’s Office and on the Reform of EU Agency for Criminal Justice Cooperation (Eurojust) will be presented for political discussion which will guide further work by experts.
On the second day of the Council chaired by the Lithuanian Minister of Interior Dailis Alfonsas Barakauskas, the Home Affairs ministers will discuss various aspects of the Syrian crisis, with particular focus on the situation of the Syrian refugees and the EU response.
“Some 2 million people have registered or await registration in neighboring countries and it continues to cause deep worry in the EU,” said Minister Barakauskas.
The ministers are expected to discuss the tragedy outside the Italian island of Lampedusa where more than 100 African migrants are confirmed to have drowned.
The Council will hear the interim report by the Commission on certain issues related to the free movement of EU citizens, based on information provided by the Member States.
EU High Representative for Foreign Affairs and Security Policy Catherine Ashton is to present issues of the civilian missions of the Common Foreign and Security Policy and encourage the Member States to participate actively.
The Council will seek a political agreement on provisional arrangements to host the European Police College (CEPOL) seat in another Member State after the UK indicated it no longer wants to host it on its territory. Seven EU Member States – Greece, Finland, Hungary, Ireland, Italy, the Netherlands and Spain – have submitted applications to host the College.