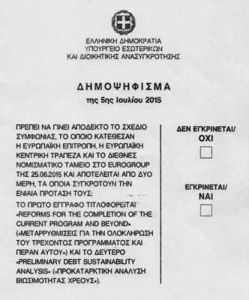 The Greek government on Monday published the text of the question it plans to put to citizens in a referendum on Sunday, asking them to decide whether or not to accept the demands made by international lenders in return for fresh cash to keep Greece from defaulting on its debts.
The referendum poses a simple question: “Should the proposal that was submitted by the European Commission, the European Central Bank and the International Monetary Fund at the Eurogroup of June 25, 2015, which consists of two parts that together constitute their comprehensive proposal, be accepted?”
The “No” box appears as the first option, above the “Yes” box.
The leftist-led government, which rejected the proposal in negotiations as contrary to its electoral pledges, has urged Greeks to vote “No.”
It says this will strengthen its hand in talks with the lenders, but eurozone leaders including European Commission chief Jean-Claude Juncker, Eurogroup chairman Jeroen Dijsselbloem and Italian Prime Minister Matteo Renzi made clear on Monday they would see a ‘No’ vote as a rejection of euro membership.