The United Nations Interim Force in Lebanon (UNIFIL) held a ceremony to observe the International Day of Peace at the Mission Headquarters in Naqoura.
The ceremony was attended by representatives of Lebanese authorities including local mayors and community leaders, the Lebanese Armed Forces, security agencies, religious leaders, members of the international community as well as UNIFIL personnel, under this year’s theme “Right of Peoples to Peace”.
The Head of Mission and Force Commander, Major-General Luciano Portolano, and Brigadier-General Francois Chaihine representing the LAF Commander, Jean Kahwaji, laid wreaths at the UNIFIL cenotaph in tribute to UNIFIL personnel who had lost their lives in the service of peace since 1978.
During the ceremony, military staff officers were awarded with the UN Peacekeeping Medal in recognition for their participation in UNIFIL.
In his address, Major-General Portolano said: “I have invited you today because we all share the same aspiration for peace, and the determination to prevent Lebanon from being again engulfed in war and destruction. This is a time of uncertainty for Lebanon, but UNIFIL is a testimony to the fact that concerted efforts can be successful in creating the condition for peace.”
Major- General Portolano added: “Today the United Nations Secretary General is asking all of us to stand in solidarity with the victims of armed conflict and the serious scourge of terrorism. I want to mention in particular the sacrifice of the Lebanese Armed Forces and Security Forces, which have lost many brave men while defending their country.”
Major- General Portolano underscored the importance coordination with the LAF and stakeholders: “Since 2006, our area of operations has enjoyed stability and security-thanks to the collaboration of UNIFIL peacekeepers, Lebanese Armed Forces, Security organisations, religious and political authorities and the people of Southern Lebanon.”
Within the framework of the celebrations, UNIFIL invited 12 students from southern Lebanon who participated in a ‘painting for peace’ activity at its headquarters. The students were invited to sketch their visions of peace on the UNIFIL walls.

Students participating in the ‘Painting for Peace” activity organized by UNIFIL for International Day of Peace, at UNIFIL HQ in Naquora.

Each year the International Day of Peace is observed around the world on 21 September. The UN General Assembly has declared this as a day devoted to strengthening the ideals of peace, both within and among all nations and peoples.
This anniversary offers a unique opportunity to reaffirm the United Nations commitment to the purposes and principles upon which the Organization was founded. The Declaration on the Right of Peoples to Peace recognizes that the promotion of peace is vital for the full enjoyment of all human rights. 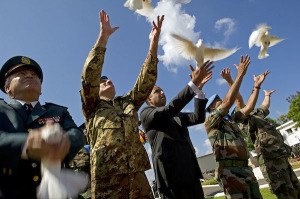 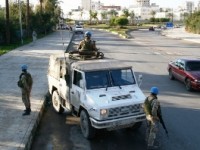