Home / Difesa / Afghanistan: the mission will be called Resolute Support

Afghanistan: the mission will be called Resolute Support 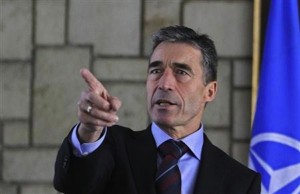 NATO Defence Ministers, 5 June 2013, endorsed the detailed concept for the new NATO-led mission to train, advise and assist the Afghan security forces after 2014.
“That concept will guide our military experts as they finalise the plan in the course of the coming months,” said NATO Secretary General Anders Fogh Rasmussen.
The detailed concept for the new mission was endorsed during a meeting of the NATO Defence Ministers with their counterparts from the 22 non-NATO countries which contribute to ISAF.
The 10 partner nations which have expressed an interest to participate in the training mission associated themselves to the decision.
The Secretary General stressed that “the new mission will not be ISAF by another name. It will be different, and be significantly smaller. Its aim will be to train, advise and assist the Afghan forces, not substitute for them”.
He explained that the mission will have a regional approach and will be based on five locations in Kabul and in the North, West, South and East. It will focus on the national institutions, such as the security ministries, and the corps levels of army and police command.
Mr. Fogh Rasmussen said: “Over the last 11 years we have given the Afghans the space to build their future. With this new mission, we will continue to support them. But ultimately it is for the Afghans to determine their own future. That is what security transition is all about and we are about to reach a key milestone in that journey.”