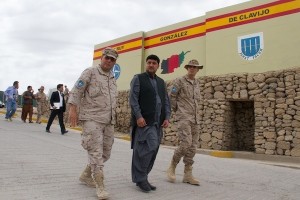 The provincial Governor Mr. Ahmadullah Alizai visited on May 25th the ISAF Base “Ruy Gonzalez de Clavijo” in Qala-e-Naw (of north-west Afghanistan), the Spanish Provincial Reconstruction Team (PRT).
He was welcomed by Colonel Jose Luis Murga, the Spanish ISAF PRT Commander, and by his Political Adviser, Mr. Emilio Pérez, and the representative of the Spanish Agency for Cooperation and Development (AECID), Mr. David Gervilla.
Colonel Murga briefed the governor on the achievements in the province and the support given to the National Afghan Army (ANA) and to the Afghan National Police (ANP).
In the field of security, Colonel Murga briefed him widely on the mission carried out by the Spanish Force since 2005. He underlined how the military capabilities have been constantly increasing since then, with more than 1200 troops and civil personnel deployed in 2012.
He also emphasized the great significance of the advisory process to the Afghan Army and the achievements of the 3rd Brigade to reach full military capabilities.
The Political Advisor, Mr. Pérez de Ágreda, gave a detailed account of how the civil part of the PRT has been helping to improve the governance process in the Badghis province.
Finally, Mr. David Gervilla emphasized the contribution of the Spanish Agency in the projects development stressing that, so far, more than 300 million USD have been invested.
The governor was very surprised and grateful for the hard work done by the Spanish PRT and asked Spain to continue with the undertaken commitment in the Badghis province, even after the redeployment of the troops.