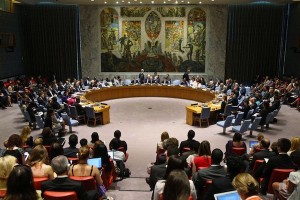 The United Nations Security Council on 24 June sent a strong signal to perpetrators of sexual violence in conflict that their crimes will not be tolerated, adopting a new resolution to strengthen efforts to end impunity for a scourge that affects not only large numbers of women and girls but also men and boys.
During a debate on women and peace and security, the 15-member body unanimously adopted resolution 2106, by which it emphasized more consistent and rigorous investigation and prosecution of sexual violence crimes as a central aspect of deterrence, and ultimately prevention.
Secretary-General Ban Ki-moon told the Council that preventing sexual violence in conflict was “our joint responsibility.”
Ban said that “it must be part of our work in many areas, from peacekeeping and political missions, to mediation, cease-fire agreements, security sector reform, justice sector reform, and the delivery of humanitarian assistance.”
He reaffirmed the United Nations system’s commitment to “delivering as one to end the culture of impunity that prevails in relation to sexual violence.”
In three previous resolutions – 1820 (2008), 1888 (2009) and 1960 (2010) – the Council affirmed that sexual violence, when committed systematically and used as a tool of war, is a fundamental threat to international peace and security, requiring an operational security and judicial response.
Film actress Angelina Jolie, who is also the Special Envoy of the UN High Commissioner for Refugees told the Council that “rape, as a weapon of war, is an assault on security and the world in which these crimes happen is one in which there is not, and never will be peace.” 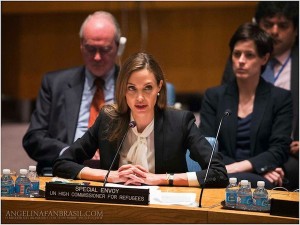 She made clear that addressing war zone sexual violence was the Council’s responsibility “as well as the duty of governments in countries afflicted by it.”
In fact, she said, “in many conflict situations there is no government to take responsibility” and therefore “there is no protection and no accountability.”
The Special Envoy said “when Governments cannot act, the UN Security Council must step in and provide leadership and assistance” as these crimes happen “not because they are inherent to war, but because the global climate allows it.”
The Special Representative of the Secretary-General on Sexual Violence in Conflict, Zainab Hawa Bangura, in her address to the Council said “today it is still largely cost-free to rape a woman, child or man in conflict.”
Bangura said sexual violence “has been used through the ages precisely because it is such a cheap and devastating weapon,” but added that “for the first time in history” this reality can be reversed.
She said it will require “leadership and political courage and a relentless determination to match the cold, calculating brutality of those who would rape the innocent for military or political gain.”
Bangura lauded resolution, saying it reinforces a compliance-based regime based on reliable and timely information and analysis, and on the actions that must be taken at the political, strategic and tactical levels on the basis of such information.
The resolution emphasized that “effective steps to prevent and respond to such acts significantly contribute to the maintenance of international peace and security; and stresses women’s participation as essential to any prevention and protection response.”
The Council recognized the need for “more timely, objective, accurate and reliable information” as a basis for prevention and response, and requested the Secretary-General and relevant United Nations entities to speed up the establishment of monitoring, analysis and reporting arrangements on conflict-related sexual violence.