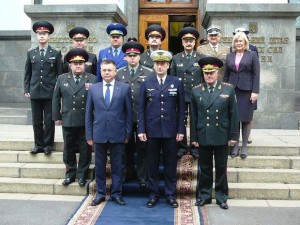 The Chairman of the EU military committee, general Patrick de Rousiers, went on an official visit to Ukraine hosted by the Ukrainian Chief of General Staff and Commander in chief of the Armed Forces, from the 9 to 12 of October.
The Chairman had very fruitful meetings on Ukrainian defence and security challenges as well as exchanges of views on the European Union Common Security and Defence Policy (CSDP) with the Minister of Defence, Mr. Pavlo Lebedev, the Deputy Minister for Foreign Affairs, Mr. Viktor Mayko, the Deputy of the Secretary of the National Security and Defence Council, Mr Oleksandr Medvedko, and the Chief of General Staff and Commander in chief of the Armed Forces, General Vladimir Zamana.
They all confirmed that Ukraine is moving on a fast track towards a closer participation to European CSDP missions. As a matter of fact, Ukraine will join, in a few months, the Atalanta mission operating in the Horn of Africa and will provide assets to the upcoming EU battlegroup on standby as of the 1st of January 2014.
General de Rousiers had also the opportunity to meet the Commander of the Ukrainian Navy, Admiral Yuri Ilin, at his headquarter in Sevastopol and to give a lecture at Kiev National University of T. Shevchenko military Institute.