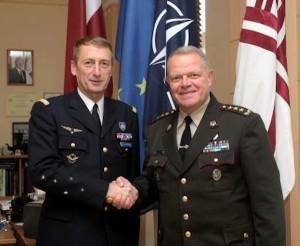 Contemporary security challenges and crisis management are the key issues discussed by the Chairman of the European Union Military Committee, Gen. Patrick de Rousiers, with the Latvian State secretary of the Ministry of Defence, Mr. Janis Sarts, the Latvian Under-Secretary of State of the Ministry for Foreign Affairs, Mr Eduards Stiprais, and with the Chief of Defence lieutenant general Raimonds Graube on his visit to Riga. (photo general Patrick de Rousiers and Chief of Defence lieutenant general Raimonds Graube)
The Chairman also had the opportunity to meet Mr Ainars Latkovkis from the Defence, Internal Affairs and corruption Committee of the Republic of Latvia Parliament.
Main subjects of the talks, focused on the Latvian contribution to the Common Security and Defence Policy (CSDP), were on the strategic perspective of the further development of the CSDP activities in the light of the preparation for the upcoming European Council on security and defence in December this year.
In addition to talks between the EUMC Chairman and the Latvian authorities, the programme included a lecture delivered by gen. de Rousiers on EU missions and operations under CSDP at the Latvian National Defence Academy.
Gen. de Rousiers also participated, upon arrival in Riga, to a wreath laying ceremony to Oskars Kalpaks monument.

The European Union Military Committee (EUMC) is the highest military body set up within the Council. It is composed of the Chiefs of Defence of the Member States, who are regularly represented by their permanent military representatives. The EUMC provides the Political and Security Committee (PSC) with advice and recommendations on all military matters within the EU.
General Patrick de Rousiers, former General Inspector of the French Armed Forces, was appointed Chairman of the European Union Military Committee (EUMC) on 6 November 2012.