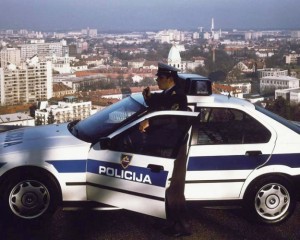 Since the Republic of Croatia has become the 28th Member State of the European Union it has joined the international law enforcement cooperation community and has become a fully-fledged member of Europol, too.

Croatia’s flag was added to the other 27 EU national emblems at Europol’s headquarters on 28 June 2013.

The occasion was marked by a ceremony attended by Europol’s Director, Rob Wainwright; the Croatian Ambassador in the Netherlands, Ms Vesela Mrđen Korać; and the Croatian Liaison Officer to Europol, Mr Blaž Mamuza.
In October 2012 a Europol Roadshow was held in Zagreb, where nearly 100 Croatian law enforcement officers participated and learned about the Europol tools and services that can support and enhance their investigations into international organised crime and terrorism.
Europol has been enjoying fruitful cooperation with Croatia since 2006 when an operational agreement was concluded. This successful working relationship is expected to develop further with Croatia’s new Member State status, and will allow for more Croatian cooperation and participation in all Europol official activities.