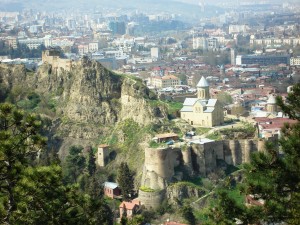 On 19 June 2014, the European Union and Georgia held the seventh round of their human
rights dialogue in Tbilisi.
The dialogue at expert level was held in a friendly and constructive atmosphere, with an
exchange on a wide range of issues of mutual interest and concern, as well as discussions on
possibilities for concrete cooperation in the field of human rights. The EU delegation was
headed by Mr Dirk Schuebel, Head of the Eastern Partnership Bilateral Division at the
European External Action Service. The Georgian delegation was headed by Ms Tamar
Beruchashvili, Deputy Minister of Foreign Affairs of Georgia.
The dialogue allowed in particular for an exchange of views on the challenges and reform of
the justice system and the law enforcement system, including the functioning of the
prosecutor’s office; elections and electoral framework; anti-discrimination policy and rights
of minorities, rights of internally displaced persons and the human rights situation in
Abkhazia, Georgia and South Ossetia, Georgia. The EU and Georgia also discussed human
rights cooperation within international organisations, in particular at the UN. The dialogue
was followed by a field trip to the administrative boundary line in Georgia between the
territory administered by the government in Tbilisi and the region of South Ossetia.
The EU-Georgia human rights dialogue takes place in the context of a deepening relationship
between both partners within the framework of the Eastern Partnership, in the run-up to
the signature of the EU-Georgia Association Agreement.
In keeping with the EU’s practice of incorporating the voice of civil society into its meetings
on human rights with third countries, the EU met with representatives of Georgian NGOs
and international NGOs prior to the human rights dialogue.
See more at:
NGOs prior to the human rights dialogue.
The EU’s relations with Georgia: http://eeas.europa.eu/georgia/index_en.htm
The EU and human rights: http://eeas.europa.eu/human_rights/index_en.htm