Home / In evidenza / EU Heads of State and Government against violence

EU Heads of State and Government against violence

Informal meeting of Heads of State or Government

Heads of State and Government had an Informal meeting in Brussels on 12 February dedicated to three major themes: the fight against terrorism, the situation in Ukraine and relations with Russia, and the Economic and Monetary Union.

Turning to the fight against terrorism, in the light of the Paris attacks and latest events they shared their experience in fighting terrorism. A statement was agreed setting out the political orientations that will guide further, intensive work in the coming months.
Following is the full transcript of the Statement by the members of the European Council, as released by the Council of the European Union:

Europeans have reacted with deep sorrow and strong unity to the recent terrorist attacks in Paris. These attacks targeted the fundamental values and human rights that are at the heart of the European Union – solidarity, freedom, including freedom of expression, pluralism, democracy, tolerance and human dignity. All citizens have the right to live free from fear, whatever their opinions or beliefs. We will safeguard our common values and protect all from violence based on ethnic or religious motivations and racism.

This also means fighting the enemies of our values. We will further reinforce action against terrorist threats, in full compliance with human rights and the rule of law. Today we agreed on the following to guide work over the months to come:

1. Ensuring the security of citizens
The security of citizens is an immediate necessity. We must better implement and further develop the tools we have, in particular to detect and disrupt terrorist-related travel, notably of foreign terrorist fighters. We ask that:
EU legislators urgently adopt a strong and effective European Passenger Name Records directive with solid data protection safeguards;
full use be made of the existing Schengen framework to reinforce and modernise external borders’ control: we agree to proceed without delay to systematic and coordinated checks on individuals enjoying the right of free movement against databases relevant to the fight against terrorism based on common risk indicators; the Commission should issue rapidly operational guidelines for this; we will also consider a targeted amendment to the Schengen Borders Code where necessary to provide for permanent checks, based on a proposal by the Commission;
law enforcement and judicial authorities step up information sharing and operational cooperation, including through Europol and Eurojust;
all competent authorities increase cooperation in the fight against illicit trafficking of firearms, including by a swift adaptation of the relevant legislation;
Member States’ security services deepen their cooperation;
Member States quickly implement the strengthened rules to prevent money laundering and terrorist financing, and that all competent authorities step up action to trace financial flows and to freeze effectively assets used for financing terrorism;
work towards the adoption of the Network and Information Security Directive advance rapidly, given the importance of cyber-security.

2. Preventing radicalisation and safeguarding values
Preventing radicalisation is a key element of the fight against terrorism. Instruments need to be brought together in a comprehensive approach to address this phenomenon. We call for:
adequate measures to be taken, in accordance with national constitutions, to detect and remove internet content promoting terrorism or extremism, including through greater cooperation between public authorities and the private sector at EU level, also working with Europol to establish internet referral capabilities;
communication strategies to promote tolerance, non-discrimination, fundamental freedoms and solidarity throughout the EU, including through stepping up inter-faith and other community dialogue, and narratives to counter terrorist ideologies, including by giving a voice to victims;
initiatives regarding education, vocational training, job opportunities, social integration and rehabilitation in the judicial context to address factors contributing to radicalisation, including in prisons.

3. Cooperating with our international partners
The EU’s external relations must also contribute to countering the terrorist threat, which is escalating in certain parts of the EU’s neighbourhood, in particular Syria and Libya. We need:
to address crises and conflicts, in particular in our Southern Neighbourhood, through a strategic rethinking of our approach;
to engage more with third countries on security issues and counter-terrorism, particularly in the Middle East and North Africa and in the Sahel, but also in the Western Balkans, including through new capacity building projects (e.g. border controls) with partners and better targeted EU assistance;
sustained and coordinated international engagement with the UN and Global Counterterrorism Forum as well as with relevant regional initiatives;
a dialogue among cultures and civilisations to promote fundamental freedoms together.

Over recent weeks the Council has stepped up its work in the fight against terrorism. The European Union will take this work forward promptly, fully involving the High Representative, the EU Counter-Terrorism Coordinator and the Member States. In April the Commission will present a proposal for a comprehensive European Agenda on Security. The Council will report on the detailed implementation of these orientations by the June European Council.
(source: Counsil of the European Union) 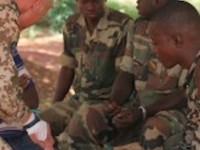