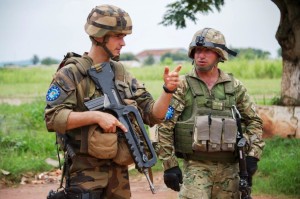 person (IDP) camps in the vicinities of Bangui’s M’poko airport and in the third and fifth district of the capital.

The Council launched on April 1 an EU military operation to contribute to a secure environment in the Central African Republic, as authorised by the UN Security Council in resolution 2134 (2014).

EUFOR RCA is to provide temporary support in achieving a safe and secure environment in the Bangui area, with a view to handing over to a UN peacekeeping operation or to African partners. The force will thereby contribute both to international efforts to protect the populations most at risk and to the creation of the conditions for providing humanitarian aid.

EUFOR RCA will operate in Bangui and in the capital’s airport.
The EU High Representative for Foreign Affairs and Security Policy and Vice President of the Commission, Catherine Ashton, said in April: “The launch of this operation demonstrates the EU’s determination to take full part in international efforts to restore stability and security
in Bangui and right across the Central African Republic. It forms a key part of our comprehensive approach to solving the huge challenges faced by the Central African Republic. I’d like to thank all the Member States and non-EU countries which are working together to make this operation a success. It is vital that there is a return to public order as soon as possible, so that the political transition process can be put back on track.”

The force is led by Major-General Philippe Pontiès (France) as EU Operation Commander.
Its Operation Headquarters is located in Larissa, Greece,while the Force Headquarters and the troops will be located in Bangui. The common costs
of the operation are estimated at € 25.9 million for the preparatory phase and a mandate of up to six months starting from the point of reaching full operational capability.
The EUFOR troops has deployed rapidly so as to have immediate effects in the operation’s area of responsibility.