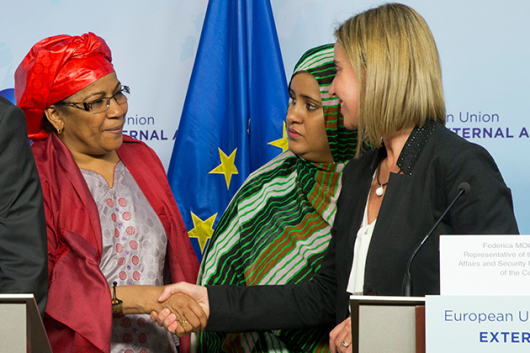 (Anthony Brown) – The migration emergency is high on the agenda of the European Union, in view of the upcoming Valletta summit in November.

More generally, the EU is focusing on the root causes of the crisis and in this framework it has decided to strengthen cooperation with Niger on migration, security and development through “High Level Dialogues”. Mali, Mauritania, Burkina Faso and Chad are also the focus of such talks.
Current cooperation is through the National Indicative Plan 2014-2020 which amounts to EUR 596 million. The four priority sectors are:
1.food security and resilience,
2.state capacity-building to implement social policies,
3.security, governance and peace-building, and
4.the opening up of regions affected by insecurity and the risk of conflict.

The Sahel is one of the poorest regions of the world. It faces simultaneously the challenges of extreme poverty, the effects of climate change, frequent food crises, rapid population growth,
fragile governance, corruption, unresolved internal tensions, the risk of violent extremism and radicalisation, illicit trafficking and terrorist-linked security threats.

The original strategic objective of the EU Sahel Strategy, emphasising the development-security nexus as well as the four pillars for its implementation, remains fully relevant and provide a comprehensive framework for EU action in the Sahel. In fact, Council has increased the budget of the EU civilian mission in Niger (EUCAP Sahel Niger) from 9.8 million to 18.4 million euros for the period 16 July 2015-15 July 2016.
This increased budget will allow for a reinforcement of the operation to combine enhanced engagement in Niamey with a permanent presence in the desert region of Agadez in central Niger.
Niger is facing security threats including terrorism, illegal trafficking of drugs, weapons and people, in particular in Northern Agadez, and is also a major regional transit hub for irregular migration. Developing a permanent presence in Agadez is key to supporting the Nigerien authorities in border and migration management, the fight against terrorism and organised crime.

The High Representative for Foreign Affairs and Security Policy Federica Mogherini visited Niger on 18 September 2015, including the mission EUCAP Sahel Niger in Agadez, and held a High-Level Dialogue with the President and the government highlighting EU comprehensive approach on migration, security and development.

EUCAP Sahel Niger was launched in 2012 to support capacity building of the Nigerien security actors. The mission provides advice and training to support the Nigerien authorities in strengthening their security capabilities. It contributes to the development of an integrated, coherent, sustainable, and human rights-based approach among the various Nigerien security agencies in the fight against terrorism and organised crime.