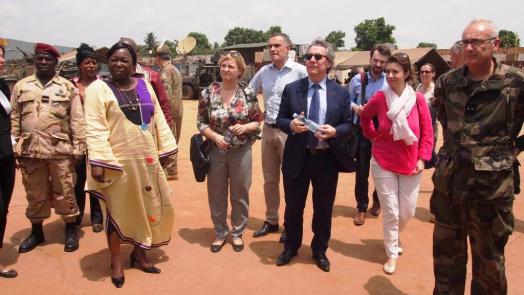 A Delegation of the Committee on Foreign Affairs of the European Parliament – Subcommitee on Security and Defence – paid a visit to the UCATEX compound, home to the European Union Military Force operating in the Central African Capital EUFOR RCA.

The Delegation met with the representatives of all EUFOR contributing nations, before a presentation of the mission and the force delivered by General Bacquet and his staff.
The briefing was followed by an exhibition of the equipment and vehicles of EUFOR’s units, notably the Finnish Explosive Ordnance Disposal Team, the Italian Engineers, the French and Georgian Infantry Forces of the Multinational Battalion, the Spanish Special Forces and the Integrated Police Unit with its Polish, Spanish and French components.

The Central African Minister of Defense – Mme Marie-Noelle Koyara – also joined the tour of UCATEX compound along with the European MPs, followed by a standing working lunch.

In the second part of the one-day visit, the Delegation was presented the European Gendarmerie Force of EUFOR, whose personnel escorted its four members in a patrol throughout the Area of Operations. A visit was paid to a clinic in the 5th District of Bangui recently refurbished by the European soldiers, followed by a meeting with the Multinational Battalion troops at the border between the 5th and the 3rd, where EUFOR had established a steady presence leading to an increase of circulation and trade.

The patrol continued at the Bridge of Unity, the full-European initiative that allowed three districts divided by the conflict to be reunited, recently inaugurated by the Central African Head of Transition – Catherine Samba Panza – and EUFOR’s Operation Commander, Major General Philippe Pontiès. The tour ended with a visit to PK5, the heart of the 3rd District, where EUFOR RCA has also patrolled 24h a day.

During the visit, on behalf of the Committee, Mme Fotyga thanked General Bacquet and EUFOR troops for being “the actors of the European solidarity in a Country linked to the European Union by friendship”, while the Minister of Defence stressed how “EUFOR represents an example of unity and collaboration hat Central Africa will remember for long.” 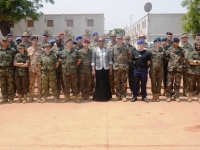 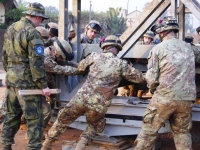 BANGUI: THE INAUGURATION OF THE EUROPEAN BRIDGE
gennaio 30, 2015 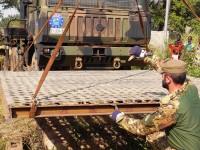