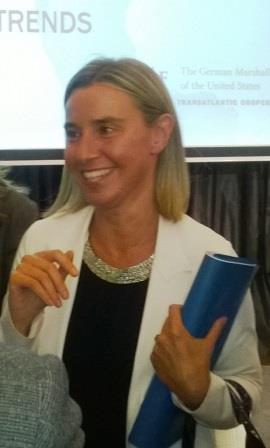 The High Representative designate Federica Mogherini called to be vice-president of the Juncker Commission has been heard by the European Parliament Committee on Foreign Affairs.

The hearing started after a 2′ introduction of the chairman who stressed that a trial period for the three hatted position of the HR has shown to have potential that can be used.
Further, he highlighted that the EEAS is taking form from the resources that have been put and needs to build content having all the EU bodies and institutions speaking with a common voice to defend our citizens.

Eventually he pointed out that there is interaction between EEAS and Parliament as CFSP is an area of the Executive but Parliament is to ratify treaties and approve the budget.
Ms Mogherini introduced her thoughts explaining that after the Lisbon Treaty there are the tools in place we need now to shape our common vision and strategy. This long term vision is not the 29° Policy but the appreciation that a common policy is in our interest and that no country can do it alone.

She then framed how she would achieve what she announced in four main points.

First, ownership in terms of a common vision built sharing visions before a crisis erupts.

Second, work together referring to all the EU bodies and institutions. This is the reason why she will move to the Berlyamont.

Third, coordination of all policies and actions that have an external dimension and between internal and external policies; CSDP is one of the 4 priorities by art. 21 of the Treaty.

Fourth, taking care of our part of the world in terms of extended neighbourhood adding that the enlargement is the best policy.

On a regional note she welcomed a greater attention to the east supporting Ukraine, Moldova and Georgia, Armenia and Arzeibijan. She also referred to Russia, and confirmed full support to the Minsk agreement. Further, she stressed that although Russia might not be a partner for the moment, she highlighted the need to reassess the relationship in the following five years.
Mentioning the southern neighbourhood, she evocated a common framework to contrast ISIL which is a global threat. She also mentioned Libya, Morocco and Tunisia.

Eventually she also mentioned the Artic as a region which is not granted that it will remain quite.

She than elaborated on partnership and on Transatlantic partnership, and added the huge potential for partnership of Latin America.

She referred to China, South Korea and Japan as countries which with a little investment could pay a lot.

She ended her speech recalling the important cooperation with UN, OSCE, AU and Arab League and stressing the importance of human rights (media freedom, women and freedom of religion) envisaging a EU coherent agenda.