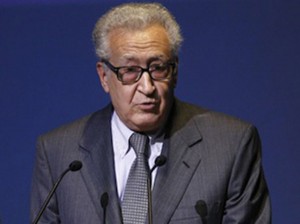 International peace envoy to Syria Lakhdar Brahimi visited the Zaatari Refugee Camp in the Kingdom’s north on Tuesday and was acquainted with the services provided to the Syrian refugees there.
During his visit to Zaatari, currently home to some 30,000 Syrians, UN and Jordanian officials briefed Brahimi on the financial and logistical burdens Jordan is facing in hosting the 200,000-strong community, the Jordan News Agency, Petra, reported.
Brahimi also met with a group of refugees, pledging to arrive at a “real political solution to allow Syrian refugees to return to their land and end their suffering”, according to Petra.
Brahimi’s visit came as part of a regional tour of Syrian refugee camps, which began with a visit to Altinozu camp in southern Turkey earlier on Tuesday.
During Brahimi’s tour of the Syrian refugee camp near the border city of Mafraq, some 200 camp residents rallied near the facility’s gates, chanting “Brahimi, leave”, accusing the envoy of “appeasing Damascus”, residents and security sources said on Tuesday.
“Brahimi is acting like he is our saviour when he is only prolonging our suffering,” said Abu Mohammed, a Daraa resident who took part in the demonstration.
“We want to send a simple message: Enough with the talks, enough with the observers, enough with appeasement.”
“We need guns, not words to stop the bloodshed,” he told The Jordan Times.
As Brahimi’s motorcade left the camp, a group of Syrian youths pelted the veteran Algerian diplomat’s vehicle with stones, Jordanian security sources and camp officials confirmed.
No injuries or arrests were reported.
Tuesday’s visits to Jordan and Turkey marked the envoy’s first since his appointment in August to broker an end to a violence that has led to the dispersal of over 250,000 registered refugees.

Syrian refugee children buy snacks from a refugee who set up a small grocery shop in front of his tent, at the Zaatari Refugee Camp in the city of Mafraq, near the border with Syria (Reuters photo)