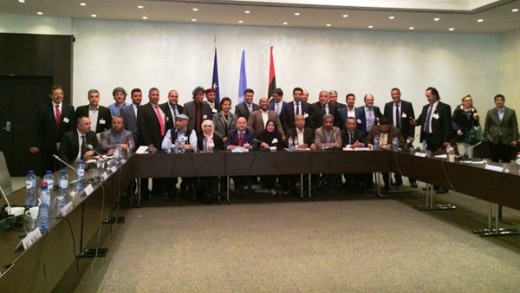 Representatives of municipal and local councils

from a number of towns and cities from across Libya gathered in Brussels, Belgium, on Monday 23 March 2015 for a two-day meeting convened by UNSMIL and generously hosted by the European Union.

The meeting, part of ongoing discussions taking place within the framework of the Libyan dialogue process, was opened by the High Representative of the European Union for Foreign Affairs and Security Policy, and Vice-President of the Commission, Federica Mogherini, and by the Special Representative of the Secretary-General for Libya, Bernardino Leon.

The meeting included 31 participants from municipal and local councils and built on the work on confidence-building measures that were agreed on in an earlier meeting in Geneva.

The meeting dealt with a number of issues, including the humanitarian challenges faced by the municipal and local councils and ways for the UN to enhance its provision of humanitarian assistance; progress on releasing detainees and addressing the situation of missing persons; the situation of the internally displaced and Libyans abroad; and improvements in the functioning of airports and air traffic.

At the end of the meeting, representatives of the Libyan municipal and local councils agreed to:
– Support the ongoing Libyan political dialogue in Morocco and the need to urgently establish a government of national concord;
– Call for a ceasefire, including an end to airstrikes and other attacks on civilians facilities;
– Condemn and fight terrorism in all its forms;
– Call for the withdrawal of armed groups from all Libyan towns;
– Call for the full reopening of civilian airports and airspace in Libya;
– Condemn incitement to hatred and violence in the media;
– Call for the full respect of the rights of detainees and the clarification of the fate of missing persons;
– Call for the return of refugees and commit to the return of all internally displaced people by 31 December 2015;
– Establish a coordination and information exchange mechanism to improve the UN humanitarian response;
– Call for full access to humanitarian assistance;
– Enhance the participation of women in the political dialogue.

The UN-led political dialogue process consists of 5 tracks: political, municipalities, security, political parties and tribal. The meeting in Brussels will be the second one of the municipalities (the first one took place in January in Geneva) and will run in parallel to discussions of the main political track in Rabat.