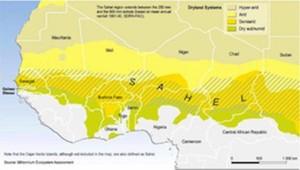 (di Anthony Brown) – Terrorists and Islamic militants who are threatening the regional peace in rebel-held northern Mali destroyed the tombs of Sidi Elmety, Mahamane Elmety and Cheick Sidi Amar, all in the west of Timbouktu and have threatened to destroy all of the 16 main mausoleum sites of Sufi shrines in the city which may constitute a war crime under Article 8 of the Rome Statute.
The attack was perpetrated despite the fact that UNESCO placed Timbuktu on its list of heritage sites in danger (on this matter see also heritage sites in northern mali placed on list of world heritage in danger).
In all, it recalls the 2001 dynamiting by the Taliban of two 6th-century statues of Buddha carved into a cliff in Bamiyan in central Afghanistan.
Currently led by Interim President Dioncounda Traoré, Mali has been dealing with a range of security, political and humanitarian problems since the start of the year related to the fighting between Government forces and Tuareg rebels that broke out in the country’s north in January. Since then, radical Islamists have seized control of the north, where they have imposed an extremist version of Muslim Sharia law as well as “very drastic punishments,” the recruitment of child soldiers, and enforced marriages that are a smokescreen for enforced prostitution (on himan rights see also http://www.fao.org/fileadmin/user_upload/sahel/docs/OCHA%20Mali%20Spetember%202012.pdf and http://www.unhcr.org/507d0c949.html ) (on the referral by the Government of Mali to the ICC see: icc-cpi.int).
In their effort to restablish full state authority over the northern part of the country and dismantling the terrorist and criminal very lucrative networks, in accordance with Security Council resolution 2071, it is imperative for Malian authorities to push indipendentist groups to cut off all ties to terrorist organizations.
The international community, and the EU in particular, are to support them in their effort.
The recently-appointed Special Envoy of the Secretary-General for the Sahel, a former Italian Prime Minister, Romano Prodi, has an important role in mobilizing international financial support, coordinate the United Nations integrated regional strategy for the Sahel, and help bring about a comprehensive solution to the crisis in Mali.
The Sahel region, which stretches from the Atlantic Ocean to the Red Sea, and includes Chad, Mali, Mauritania, Niger, and parts of Sudan, Cameroon and Nigeria whose porous borders present significant security challenges and allow terrorists and Islamist fighters of various nationalities to move freely from one area to another.
The Council of the European Union, in his conclusions on the situation in Mali of Oct 15th (see: http://www.consilium.europa.eu/uedocs/cms_data/docs/pressdata/EN/foraff/132850.pdf), requested “that work on planning a possible CSDP military operation be pursued and extended as a matter of urgency, in particular by developing a crisis management concept relating to the reorganisation and training of the Malian defence forces, taking account of the conditions necessary for the success of any such mission, which include the full support of the Malian authorities and the definition of an exit strategy.” (on this issue see also: http://www.diplomatie.gouv.fr/en/country-files/mali-224/events-2627/article/mali-situation-in-sahel-09-10-12 ).
In his speech in Bamako, the Deputy Secretary-General confirmed a possible international military force assisting the Malian Armed Forces in recovering the occupied regions in the north of the Country.
But an international military operation in northern Mali appears to be just a very expensive and almost impossible mission. Therefore, diplomatic community must play a more active role in supporting local authorities to ease the crisis in Mali that already goes beyond the country and has the potential of spreading to the whole Sahel region if it is not managed.