NH90 (NATO Helicopter for the 1990s): a success in European military Aeronautical Industry 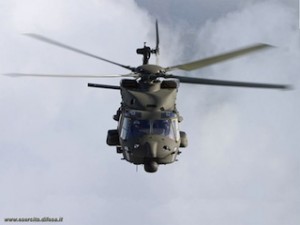 (di Anthony Brown) – The NH90 was born in a timeframe when reorganisation of the aerospace industry on a world scale had brought about a profound reorganisation of the production cycle in global terms as well as a drastic reduction of the operators in the global market.
As a matter of fact, in the early 90s, the aviation industry underwent a period of crisis due to a sharp drop in world demand (The first gulf war and the 9/11 security concerns had a large negative effect on civil aviation, while the fall of the iron curtain triggered an interruption of many military procurement programs) and a heavy decrease in the investments both private and public. The tendency to form international relationships was the key for maintaining competitivness. The high level of technology achieved required a global market to remain profitable. It was the time in 1992 when the German MBB and the French Aerospatiale joint their helicopter divisions and created Eurocopter, to strengthen its position in global markets. After ten more years 4 were the econmic competitors left on the American market from the intial 26; the same dynamics in the European market were observed and from the initial 21 companies only four survived (BAE Systems, EADS, Finmeccanica, Thales).
Consolidation of member Nations (customers) common requirements by hosting various fora on these issues showed a strong interest of Member States in the Aeronautical industry and related initiatives.
Discussion of Nations specific requirements, thus managing the execution of the whole NH90 programme covering the design, development, production and logistics for the participating nations and adjoin nations which have also ordered the NH90 reaffirmed this strong will.
The programme was set up to meet the needs of French, Italian, German and Dutch Armed Forces to tackle the military scenarios of the future through a very innovative “medium” class helicopter for naval, tactical and utility applications.
The NH90 project was initiated by a study conducted by the NATO Industrial Advisory Group “NIAG SG14”, in turn followed by a Memorandum of Understanding signed in 1990 by the Governments of the four countries and, in 1992, the Foundation of the NAHEMA Agency (NATO Helicopter Management Agency).
The latter representing the French, German, Italian and Dutch Nations and NHlndustries, both located i Aix-en-Provence (France), signed the NH90 Design and Development Contract on 1 September 1992.
On 1 September 1992, NAHEMA and NH-Industries, both with head offices in Aix-en-Provence (France), signed the contract for the development of the new helicopter and related prototypes – the Naval NFH version (NATO Frigate Helicopter) and the Tactical/Utility TTH version (Tactical Transport Helicopter).
Elettronica S.p.A. and Eurocopter Deutschland of NHI in 1997 signed the contract for the development and production of prototypes of ESM per the Naval version (NFH). The MoU stating the Production go-ahead was signed on 8 June 2000, and the Industrialisation and 1st Batch Production Contract on 30 June 2000.In 2001, the production contract was signed that envisages, for the first stage, almost 100 examples of NFH and more than 200 of TTH. Portugal became the fifth member of NAHEMO signing the MoU on 21 June 2001. At the same time, NAHEMA and NHlndustries signed the production contract for the 10 NH90 helicopters required by Portugal.
In 2002, Electtronica S.p.A. and Eurocopter Deutschland signed the ESM Production and Investment Contract for the Naval version (NFH).
NAHEMA also controls the overall execution of the programme on behalf of the customer. NHIndustries on the other hand is responsible for the Programme Management of NH90 contracts and is supported by a Joint Guarantee signed by its Partner Companies, AgustaWestland, Eurocopter, and Stork Fokker.
The NH90 helicopter programme is the largest ever launched in Europe, with firm orders now reaching 529 units for 19 Armed Forces. The NH90 entered service in 2006 and has been selected as a medium multi-role helicopter by 14 nations: Australia, Belgium, Finland, France, Germany, Greece, Italy, New Zealand, Norway, Oman, Portugal, Spain, Sweden, The Netherlands. Its susccess riaffirms the dominance of the world market for helicopter by the Eurocopter Group and Agusta Westland. Two versions are available from the core air vehicle; Tactical TroopTransport (TTH) and NATO Frigate Helicopter (NFH).
The NH90 meets the latest safety standards and is able to operate in harsh military environments, over land and sea, day or night. Before the end of the year 2012 they are being committed to operational use in Afghanistan by the Italian Army Aviation.
Six NH90 final assembly lines are now operational in Eurocopter, Marignane – France, Eurocopter Deutschland, Donauwörth – Germany, AgustaWestland, Vergiate – Italy, Patria, Halli – Finland, Eurocopter Spain, Albacete – Spain, Australian Aerospace, Brisbane – Australia under direction of the pan-European NHIndustries industrial organization – which is owned by Eurocopter (62.5%), AgustaWestland (32%), and Fokker Aerostructures (5.5%). Established in 1992, NHI has managed the design, development and entry to service of the NH90 for both NAHEMA (NATO Helicopter Management Agency) and export customers.
The project represents a great effort to increase the efficiency along the value chain vertically, by organizational changes, and horizontally, by regional diversification, contributes much to the efficiency of the EU Aeronautical Industries. Each Member State fostering their domestic excellencies in the specific field. It represents a good example of general co-ordination and institutionalized information on activities. This prevented from the potential risk of double work and lost of synergies. Again, these efforts translated into good technological improvements. Firms therefore concentrated their know-how in particular areas to push the technological frontier. It therefore implied the need to develop a system of relationships between specialised firms. In the face of growing budget constraints all efforts have been taken to increase efficiency.
An improved coordination on the level of the EU can contribute not only to a more efficient use of the funds, but could provide impetus to spill-over effects to civil Aeronautical Industries and suspend financial stress to a certain extent.
While EU harmonisation efforts are visibly gaining pace, the real opening of intra-European borders and the emergence of a “common European Defence Equipment Market” will undoubtedly only happen over time as a result of concrete policy implementation efforts under the guidance of the European Security & Defence Policy.