On the release of OSCE Special Monitoring Mission Observers 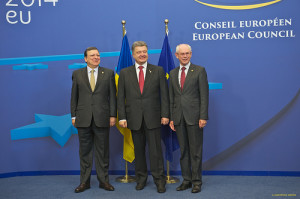 Signature ceremony of the Association Agreements between the EU and Georgia, Moldova and Ukraine

Following a Statement by the Spokesperson of the European Union External Action Service on the release of OSCE Special  Monitoring Mission to Ukraine monitors:
“We have learned with relief that the remaining 4 monitors of the OSCE Special Monitoring Mission to Ukraine have been released yesterday in Eastern Ukraine. Friday’s European Council Conclusions highlighted the release of hostages including all of the OSCE observers as one of four crucial steps to be undertaken by Monday 30 June.
We expect further hostages detained by illegal armed groups in Eastern Ukraine to be released without delay.
We take this opportunity to reiterate the EU’s firm support for the work already undertaken by the SMM as well as for the OSCE monitoring the implementation of President Poroshenko’s peace plan.”