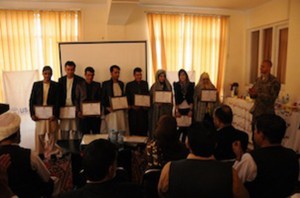 Military and civilian leadership from Provincial Reconstruction Team (PRT) Farah leadership attended a ceremony for the first-ever graduates of the Regional Afghan Municipalities Project for Urban Populations (RAMP UP) program in Farah City.
Ten local Afghan interns completed the program which supports capacity building at the municipal level. Eight of the ten graduates were recognized for their successful completion of the program, with two students having graduated early.
Of the ten graduates of the program, four graduates have already earned full time jobs within Farah City working with the city and within the offices of provincial level line directors. Additionally, three of the graduates of the program were young, Afghan women, increasing the number of women working at the municipal level in Farah by one hundred percent.
The level of education in Farah province has increased over recent years as local Afghan leaders have taken on initiatives to bring education to their people. However, education doesn’t always equate with experience, which is a key part of earning a position in the local culture, and the internship program provides just that.
“We’ve seen a lot more education in the province, but most people just don’t have the experience,” said Chris Geurtsen, a USAID field representative who works with the PRT. “This program supports the people, and helps them gain experience at the municipal level.”
Interns in the RAMP UP program complete a six-month program that includes two training events per month with Afghan advisors from Herat, in addition to their duties working at municipal offices twenty hours per week.
Each of the ten graduates worked in varying positions at the municipal level during their internships, each earning a small, weekly stipend to provide for food and transportation.
Nazila, who is a RAMP UP program coordinator, expressed her happiness about the success of the program. “This was a six month program for qualified candidates to work at various municipalities. Today is the last day of their program, and they’ve been successful.”
During the program, the interns worked on a variety of projects including internal databases within the municipality for tracking property titles and archiving records that had largely been untouched for years.
Much of their work included title work, which was a real issue in the municipality when it came to property ownership, tax collection and other land-use problems. Their on-the-job training not only helped them to gain experience, but it helped to address real problems in the community.
Nazila also said that they plan to implement another RAMP UP internship program from January to July 2013 to build capacity in the province, and to build on the successes they had in this group of interns.
U.S. Navy Cmdr. Louis McCray, commanding officer of PRT Farah recognized the significance of the days’ event. “This is a great example of Afghan mentors working with local Afghans to support the community. The graduates of this program have a real opportunity to work in their community in a substantive way to move community programs and initiatives forward.”
PRT Farah’s mission is to train, advise, and assist Afghan government leaders at the municipal, district, and provincial levels in Farah Province, Afghanistan. Their civil-military team is comprised of members of the U.S. Navy, U.S. Army, the U.S. Department of State and the U.S. Agency for International Development (USAID). For more information about the PRT follow their page on Defense Video and Information Distribution System (DVIDS) at www.dvidshub.net/unit/PRTF.