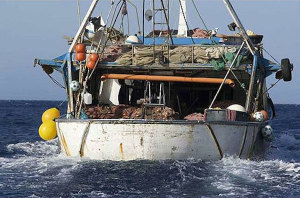 A Sicilian fishing boat with seven crew has been seized by armed men 65km (40 miles) off the coast of Libya.
The vessel, with three Italians and four Tunisians on board, is thought to have been taken to the port of Misrata.
Fishing co-operative spokesman Francesco Mezzapelle was quoted by AP as saying that port authorities were alerted early on Friday by another Italian fishing boat in the area.
Mr Mezzapelle said that there have been a dozen such seizures since 2005.
He said that it was around this time that Libya insisted that its territorial waters extended more than 112km off shore – much further than international agreements allowed.
The co-operative has been in touch with the Libyan authorities and the Italian Foreign Ministry in relation to the seizure, Mr Mezzapelle said.
He said that the armed men did not appear to be from the Libyan military.