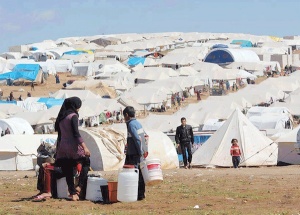 The new EU regional Trust Fund in response to the Syrian crisis, held its first board meeting and adopted European response programmes for € 40 million. It will provide aid to 400,000 Syrian refugees and host communities in need in Lebanon, Turkey, Jordan and Iraq, focusing on education, livelihoods and food security targeting especially children and young people.
This Trust Fund provides a regional response to the regional dimensions of this crisis, thus enabling the EU and its Member States to intervene jointly, flexibly and quickly, in response to changing needs.
Federica Mogherini, High Representative for Foreign Affairs and Security Policy/Vice-President of the European Commission said: “While the EU continues to support all efforts to achieve a Syrian-led inclusive political transition, the EU and its Member States remain the largest contributors to the international response to the crisis. This Trust Fund is another illustration of the EU’s commitment to help the victims of this crisis of unprecedented magnitude in Syria and the neighbouring countries. Our objective is to contribute to a strategic de-escalation of violence in Syria and to help build resilience in the region more generally, in order to alleviate the suffering of the people and create a basis for a sustainable and inclusive political process”.
Commissioner for European Neighbourhood Policy and Enlargement Negotiations, Johannes Hahn stated: “Helping Lebanon, Jordan, and Turkey and through them the almost 4 million refugees they host on the ground, is the most effective means to turn despair and illegal trafficking into hope and resilience. As we had to witness in recent months, the conflict has direct consequences for EU security, notably through foreign fighters, terrorism, illegal migration and the polarisation between religious communities. The majority of refugees are children and young people, whose future holds little prospect and risks becoming a fertile breeding ground for radicalization if we don’t boost our response. The EU Trust Fund is a new and innovative way of pooling our resources into one single and flexible mechanism with high European visibility responding together to this unprecedented crisis in our southern neighbourhood”.
German Minister of Economic Cooperation and Development Dr. Gerd Müller said: “I hope that the German contribution will move other member states or third countries to also make contributions to the EU Trust Fund. I am confident that, with this new instrument, we will be able to respond flexibly and without delay to the needs of the people in the crisis region of Syria and lraq, offering European assistance that is well coordinated and flexible”.
This funding comes from the EU budget and Italy while Germany pledged an additional contribution of €5 million which is subject to parliamentary approval. Further substantial contributions to the EU Trust Fund from the EU budget and Member States are expected before the end of the year, when a second round of response programmes can be adopted. The three response programmes launched today provide targeted support to the most affected Syrian refugees and their host communities in the region:
Firstly, with €17.5 million the EU Trust Fund will provide more than 200,000 Syrian refugee children in Turkey with additional second-shift Arabic teaching, life skills education, educational materials & school supplies and psychosocial support. There will be a special focus on access to safe spaces in host communities for Syrian children and adolescents, especially girls, to counter the risk of sexual and gender based violence. In addition, 3,700 Syrian volunteer teachers will receive training and incentives to enhance quality of education in Arabic; and more than 31,000 vulnerable Syrian refugees will receive monthly vouchers to get food.
Secondly, a new regional higher and further education facility for young Syrians will address the forced dropout of almost half of Syrian students from university since the beginning of the refugee crisis. In Lebanon, Jordan, Turkey, Iraq and Syria, this programme of €12 million will reach and assist up to 20,000 young Syrians through a combination of full-time scholarships, full time enrolment in short-cycle higher education courses, face to face, blended and online. This EU Trust Fund programme will thus boost by four times the number of Syrian students presently receiving international assistance to continue their studies (currently 7,000), and thus help to reverse the radicalisation and brain drain resulting from the war in Syria.
The third programme of €10 million will sustain livelihoods by increasing short-, medium- and long-term economic opportunities for Syrian refugees and host communities in Lebanon, Jordan, Iraq and Turkey, reaching up to 190,000 people in 90 poor communities most affected by the refugee influx. The programme will help in particular youth and women, by strengthening their prospects and those of host populations to be economically and socially productive. At least 15,000 unemployed and disillusioned youth will directly benefit through short-term work, training and community engagement.

Background
Since the start of the conflict in Syria, more than 11.5 million people have been forced to flee their homes, including almost 4 million who fled to neighbouring countries. Inside Syria alone more than 12 million people are in need of urgent humanitarian assistance, an increase of 30 percent compared to one year ago. The EU and its Member States have thus far mobilised €3.5 billion in aid to respond to the crisis.
In response to the Syria crisis the EU significantly increased its funding at the 15 March Third International Pledging Conference for Syria in Kuwait. Together, the European Commission and Member States pledged close to €1.1 billion – doubling the overall EU pledge at the 2014 Conference. Of this, €500 million in humanitarian aid, early recovery and longer-term stabilisation assistance come from the EU budget, which nearly triples the contribution from last year. EU Member States also increased their pledges compared to 2014.
The EU Trust Fund is open to all EU Member States, as well as to other donors, public or private. It will enhance Europe’s response to the crisis both as a donor and doer by addressing the massive and increasing resilience and stabilisation needs in Syria’s neighbouring countries, in particular Lebanon, Jordan, Turkey, and Iraq, as well as over time also inside Syria. This fund may also be adapted to reconstruction needs in Syria in a future post-conflict scenario, thus becoming a funding vehicle for a future reconstruction effort. The Arabic name of the Trust Fund is “Madad”, broadly meaning providing help jointly with others.
This initiative should be seen as an integral part of the EU efforts to work with third countries on the comprehensive approach to managing migration better in all its aspects as also reflected in the European Agenda on Migration published on 13 May 2015.

More about the EU regional Trust Fund in response to the Syrian crisis http://ec.europa.eu/enlargement/neighbourhood/countries/syria/madad/index_en.htm

Commissioner Hahn’s speech at the first board meeting of the EU regional Trust Fund in response to the Syrian crisis http://ec.europa.eu/avservices/video/player.cfm?sitelang=en&ref=I103842