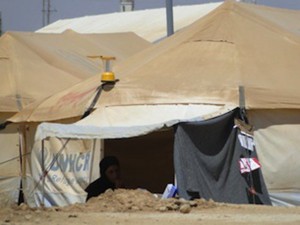 The number of Syrians fleeing to Jordan is plummeting in the face of what activists describe as the regime’s renewed attempts to tighten its hold over the border region.
Jordan has witnessed a “steep drop” in new refugee arrivals over the past 72 hours, down from hundreds to an average of 60 crossings per night, according to the UN Refugee Agency (UNHCR).
“We are witnessing artificially low numbers of new arrivals — this is a sign that there are many displaced Syrians who at the moment aren’t able to cross through,” UNHCR Representative in Jordan Andrew Harper told The Jordan Times.
The drop comes amid increased Syrian military activity in the southern region, which activists claim is part of a new campaign by Damascus to re-assert its authority over its borders.
According to Syrian activists, regime forces have nearly “doubled” military patrols and tanks along major refugee crossing routes in southern Syria in a bid to cut off a potential flow of supplies to rebel forces and displaced Syrians.
“The regime is following a very clear strategy: First they bomb liberated regions, then they cut off their lifelines,” said Abu Hani, a member of the Free Syrian Army stationed near Daraa.
“They want to drain the last drop of blood from the Syrian people”. Syrian activists said the crackdown has led to a “suspension” of large-scale crossing operations, claiming that the journey into Jordan has become “too risky” for the hundreds of internally displaced women and children looking to flee the country.
Activists noted that some 8,000 displaced civilians remain “trapped” by the ongoing military blockade in the border region, warning of a potential humanitarian crisis should rebel forces fail to locate alternative routes into Jordan.
“There are women and children without shelter and food, who are living under the threat of missiles and bullets,” Mohammed Al Darawi, an activist affiliated with the so-called Local Coordination Committees, told The Jordan Times.
“Thousands may die if we don’t act soon,” he warned.
Jordan follows an open-border policy, having granted refuge to over 210,000 Syrians since the onset of the conflict in March, 2011.