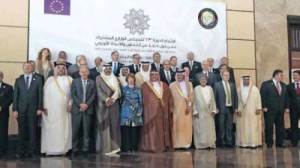 The 23rd session of the Joint Council and Ministerial Meeting of the Cooperation Council for the Arab States of the Gulf (GCC) and the European Union (EU) was held in Manama, capital of the Kingdom of Bahrain, on 30 June 2013.
The EU High Representative Catherine Ashton and high-level representatives of Member States met their counterparts from the Gulf Cooperation Council (Bahrain, Kuwait, Oman, Qatar, Saudi Arabia and UAE).
The Ministers underlined the importance of a unified international stance to reach a comprehensive political solution to put an end to the Syrian crisis, stop the bloodshed of the Syrian people, achieve their legitimate aspirations, safeguard Syria’s security and unity, and avoid serious implications for the whole region.
They reiterated the utmost urgency of finding a political settlement of the Syrian conflict and called on all actors to contribute constructively to this objective. In that context, they pledged that they will spare no effort in helping to create the appropriate conditions for a successful convening of the peace conference on Syria.
The Ministers also condemned the participation of Hezbollah and other foreign forces in military operations in Syria. The Ministers further expressed concern at the acute humanitarian needs in Syria and the wider region, and urged the international community to make additional commitments to allow for the free access of humanitarian aid, assistance and protection inside Syria and for Syrian refugees in neighbouring countries.
The six Gulf monarchies announced they are “following with deep concern… the unjust siege Syrian regime forces are imposing on Homs… with military support from the militias of the (Shiite) Lebanese Hezbollah movement and under the umbrella of Iran’s Revolutionary Guards.” and urged the “Security Council to urgently meet to break the siege on Homs and prevent the Syrian regime and its allies from committing horrific massacres.”