U.N. chief call for ceasefire in Yemen and announces trip to Vatican 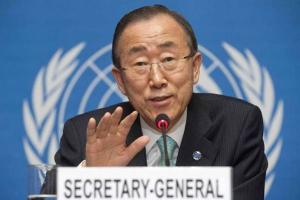 U.N. Secretary General Ban Ki-moon called for a ceasefire in Yemen Thursday night in an address to the National Press Club and announced he will go to the Vatican this month to further his long concern about climate change and the environment.
Yemen and climate change were only two of the world’s hot spots Ban said had led a colleague to remark that “never had he seen a period like this one at once.”
“Yemen is in flames,” he said, adding that an “astounding” one-third of the fighters there are children.”That is why I am calling for an immediate ceasefire. The diplomatic process is the best way out of a drawn-out war with terrifying implications for regional stability.”
His proposal drew applause from an audience at the sold-out dinner in the club’s ballroom.
Ban is the eighth U.N. secretary general and the sixth to speak at the National Press Club.
He devoted the most attention in his remarks to climate change, noting that it involves “a strong moral dimension.”
Ban said he will go to the Vatican later this month and meet with Pope Francis about “common concerns,” including the encyclical on the environment that the Pope plans to issue in the months ahead. He said he also has invited the Pope, President Obama and other world leaders to U.N. summit in New York in September.
Ban praised both Obama and President George W. Bush for their support on climate change. He said he raised the issue with Bush in the first month of his first term as secretary general in 2007 and commended Obama as well as the European Union for their support.
“We must not let the smoke from these fires obscure long-term opportunities,” he added, listing the U.N.’s 15-year pursuit of its goal to lift 700 million people out of extreme poverty as well as “the crucial role of justice, institutions and fundamental freedoms.”
In the traditional light-hearted final question, NPC President John Hughes asked what he would do when he left office and had more free time.
Ban said he had been very busy with little free time. Pausing, he added he envisioned taking his wife of 45 years to dinner and spending time with his family. Then, he said with a smile, with your children one has to be “tough and disciplined,” but in the case of grandchildren, “you can spoil them.” 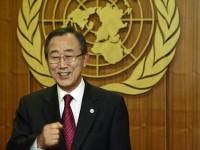 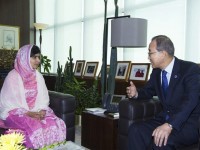