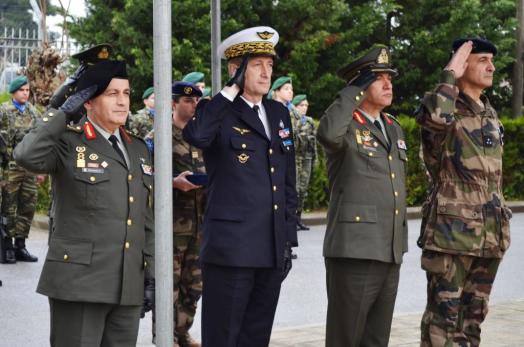 The EUFOR RCA Operation Commander, French Major General Philippe Pontiès, welcomed the Chairman of the European Union Military Committee, General Patrick de Rousiers, accompanied by the Hellenic Chief of Defence, General Mikhail Kostarakos, the Chief of the Hellenic Army General Staff, Lieutenant General Vasileios Tellidis, a delegation of Ambassadors and Defence Attachés of the countries which contributed to the European Operation and their respective Military Representatives to EU.

In his speech General Kostarakos underlined the tremendous work achieved by the EUFOR RCA Headquarters under the command of General Pontiès, which was activated and completed the operation planing and force generation process in a remarkably sort period of time. The Hellenic CHOD closed his remarks stating that “all EUFOR participants through their efforts have proved that EU Common Security and Defence Policy, based on this exceptionally skilled personnel can achieve all its goals”.

During his speech, General de Rousiers, emphasized the significant contribution provided by Greece to the European Common Security and Defence Policy. The activation of the Larissa Headquarters has highlighted the great commitment, professionalism and high military values of the Hellenic personnel. The EUMC Chairman also underlined last week’s statement of the Central African Republic head of State, Mrs Catherine Samba-Panza, who expressed her great satisfaction for the outstanding work achieved by the European soldiers. General de Rousiers concluded “In a few minutes we will hold down the EUFOR RCA flag and declare MISSION ACCOMPLISHED. General Ponties, all of you, you are all deserving our merit. The European Union and each of its Member States, are very proud of every one of you”.

During the ceremony the EUFOR RCA Operation Commander was awarded with the Medal of Merit and Honor of the Hellenic Republic by the Hellenic Chief of Defence, for his charismatic leadership as Commander of the EUFOR RCA OHQ in Larissa. Major General Pontiès was also decorated for his exceptional work as Commander of the EU Force deployed in Bangui, by the EUMC Chairman with the “EU Common Security and Defence Policy Service Medal”.

Last but not least, the French Ambassador in Greece awarded with the Golden Medal of National Defence of France the Chief of Staff of the EUFOR RCA OHQ, Greek Brigadier General Christos Drivas, for his continuous efforts and efficient command of the EU Headquarters in Larissa, as the “right hand” of General Pontiès, during the whole EU Operation in Central African Republic.

The most emotional moment of the ceremony was the minute of remembrance held for the death of Corporal Heirii Moana, the young French Soldier who died suffering from a severe form of Malaria, the only casualty of EUFOR RCA.

After 11 months of intensive operations EUFOR RCA has successfully completed its mission in Bangui and all components have left the Central African Republic to return to their countries, but at the same time the European mission EUMAM is deployed, to facilitate the reorganization of the Central African armed forces.
After having handed over the responsibility of the airport one the 17th of November, EUFOR has transferred the responsibility of both 3rd and 5th districts to MINUSCA on the 28th of February, at a symbolic parade with all International Forces and Transitional Authorities.

Initially agreed for a period of 6 months after achieving full operational capability of the force, the mandate of EUFOR RCA actually lasted 9 months, after the Central African authorities and the United Nations requested an extension, deploying on the ground about 750 soldiers from 14 European Countries.
During the last 11 months, the level of security in Bangui has significantly improved, facilitating the deployment and actions of humanitarian actors embodying a global approach which is the higher level benefit of the operations of the European Union. IDPs are going back to their homes while the first refugees are begining to return to Central African Republic. And thus the economic and social life has restarted, the iconic PK5 market continues its development, freedom of movement of people has improved significantly, and all Bangui communities have begun reconciliations to regain their life together.

In his last speech delivered at UCATEX base to the lined-up EUFOR RCA Units, General Jean-Marc Bacquet, Force Commanders of EUFOR RCA, praised the continuous efforts of the European soldiers deployed in Bangui, to attain a safe and secure environment and to allow humanitarian organizations to provide aid and displaced persons to return home.

During the final farewell, addressed to the Central African authorities on the 13th of March, the Ucatex compound was named “camp Moana” in honor of the French Master Corporal Moana Heiarii who died for EUFOR in the fulfilment of his mission on November 5, 2014; in his speech General Philippe Pontiès, Operational Commander of EUFOR RCA said: “My wishes for success are finally going to EUMAM, which will extend in other forms the dynamics of EUFOR RCA, showing the determination of the European Union to continue to play an active role alongside the United Nation, for the population and in support of the transition process and reconstruction work in Central African Republic.”