Home / In evidenza / EUFOR RCA has a new force commander 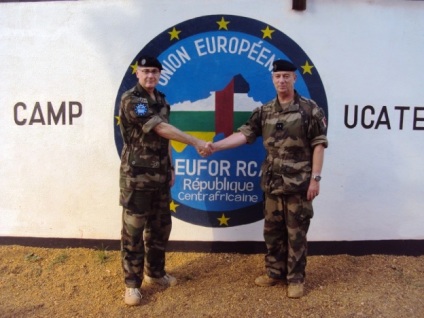 The European Union military mission in the Central African Republic,
a bridging force with a view to handing over its mission by March 2015 to the 12,000 strong UN Peacekeeping Operation MINUSCA, has new Force Commander French General Jean Marc Bacquet who took over command from General Thierry Lion.

On EUFOR RCA which is a genuinely European and multinational battalion-sized force – supplemented by a gendarmerie-type police force – contributed by many EU member-states and third EU states, with approximately 700 troops General Bacquet stated “The objectives and the spirit remain the same” – and added – “EUFOR will be population-centric, in the perspective of handing over our area of operations to the United Nations Mission MINUSCA in March 2015, and of preparing the ground for a new European advising initiative in support of the future Central African Armed Forces”.

As a matter of fact, the European Union Force to Central African Republic (EUFOR RCA) aims to provide temporary support to help the local and international forces to achieve a safe and secure environment in the capital Bangui and its airport, and to allow humanitarian organizations to provide aid and displaced persons to return home. The main effort is on protecting the population.

In his final Press Conference held at the European Union Delegation in Bangui, General Lion gave an overview of the challenges and achievements of EUFOR RCA troops on the field, essentially aimed at protecting Bangui’s population of Districts 3 and 5 as well as securing the airport of M’Poko, whose security framework was handed over to MINUSCA in mid-November as the first step of the global transition between EU and UN.

In this regard, General Lion stated “The key factor of success is the continuous presence of EUFOR patrols in the area of operations seven days a week and 24 hours a day, in order to build confidence and trust and at the same time to deter violence and crime”. Over the last three weeks EUFOR’s Multinational Battalion has established a fixed presence between Districts 3 and 5, fostering a remarkable increase of the circulation and a gradual return to normality. Another achievement was the facilitation of the return to their homes of three quarters of the 80,000 displaced persons that had settled nearby the airport of M’Poko.