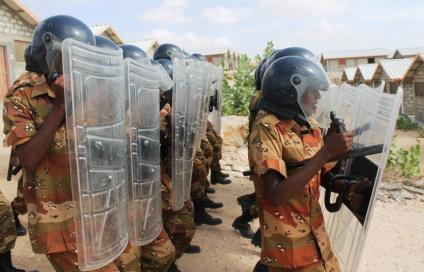 The courses were planned, organized and conducted by EUTM Somalia in coordination with the SNA, UNSOM, AMISOM and Bancroft.

In this occasion, the Military police carried out an exercise which showed their skills in carrying out their duties. The exercise was aimed at testing the capacities of the graduating MPs in executing VIP escort, crowd control and anti-riot activities, locate and apprehend suspects, and crime scene investigation.

The ceremony was attended by the Director General of the Ministry of Defence, Mohamoud Auke, the SNA Deputy Chief of Defense Forces, Brigadier General Abdirizakh Elmi, the appointed Director of the Operations of the EU Military Staff, Brigadier General Daniel Grammatico, the Deputy Mission Commander of EUTM Somalia, Colonel Anders Svensson, and a number of high rank officials form the SNA, AMISOM, UNSOM and Bancroft.

During his speech, General Elmi praised EUTM Somalia trainers for their efforts in support of the SNA, and the Somali participants to both courses for their motivations in learning new skills that will help them during the performance of their duties.

Colonel Svensson, while congratulating the participants for their achievements, highlighted that these courses once again show the commitment and determination of the European Union and the international community in support of the Somali institutions.