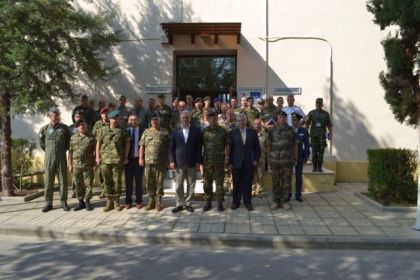 Greek Brigadier General Christos Drivas, the Chief of Staff of the Operation Headquarters for the EUFOR RCA operation, based in Larissa, briefed the Minister of Defence on the operational capabilities of the Headquarters, the humanitarian situation in the Central African Republic (CAR) and the achievements of the European Union operation so far.

He emphasized the fact that during this operation a fast track planning process took place for the first time in the history of EU operations. He also stressed that the EUFOR RCA operation is the only EU operation with troops on the ground.

During his visit, the Hellenic Minister of Defence greeted all the representatives of the participating nations and commented on the outstanding performance of the multinational staff.

Assigned as the new Migration and Home Affairs Commissioner to the EU, Minister Avramopoulos served in the Hellenic Air Force (1978-1980) and has had a rich political career. From 1994 to 2002, he was the Mayor of Athens, and over the past ten years, has held the posts of Minister of Tourism, of Health and Social Solidarity, of Foreign Affairs and finally, of National Defence.