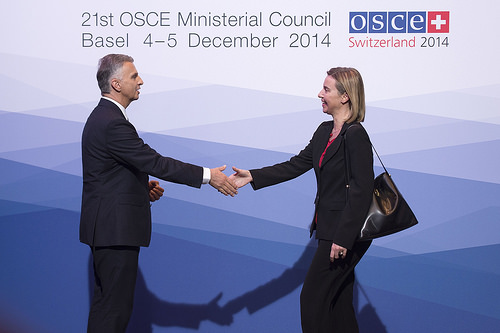 is taking place at the Basel Exhibition Centre, in Basel, Switzerland at the invitation of the 2014 OSCE Chairperson-in-Office, Switzerland’s Foreign Minister Didier Burkhalter.

The foreign ministers discussed the Ukraine crisis and common challenges within and beyond the OSCE area. The Council will set the course for the future work of the organization with Serbia taking the chair from 1 January.

Following is today’s statement by High Representative/Vice-President Federica Mogherini at the OSCE Ministerial Council in Basel:

“While the crisis in and around Ukraine pushes the OSCE to its limits, it has also highlighted the OSCE’s relevance and strengths as an organisation:

First, the crisis has underlined the value of the OSCE concept of comprehensive security. Ukraine has shown that there can be no lasting security and stability without good governance and respect for human rights and fundamental freedoms. We therefore remain extremely concerned by the trend that OSCE principles and commitments are increasingly challenged in parts of the OSCE area. Ukraine has reminded us why more than twenty years ago we agreed that commitments in the human dimension are matters of direct and legitimate concern to all participating States and do not belong exclusively to the internal affairs of the State concerned.

Second, events in and around Ukraine have demonstrated the value of OSCE field operations. We support the impartial work of the Special Monitoring Mission and commend its reporting activities and its ability to adapt to changing circumstances. We also commend the way the Project Coordinator in Ukraine has responded to new developments.

Third, the engagement of ODIHR, the High Commissioner on National Minorities, and the Representative on the Freedom of the Media testifies to the crucial role of the autonomous OSCE institutions that play an indispensable role in assisting participating States in implementing their commitments.

Let me say on behalf of all the European Union how much we value the Swiss Chairmanship for its efforts with regard to the crisis in and around Ukraine, including through the Trilateral Contact Group, and the excellent, precious work that Heidi Tagliavini has done and is doing in this regard. We welcome the commitment of the incoming Serbian Chairmanship to maintain a strong focus and balanced approach to this crisis. We trust that the incoming Chairmanship will do its utmost to uphold the OSCE principles and commitments.

We all need to work towards a sustainable political solution to the crisis in and around Ukraine. Any solution must be based on respect for Ukraine’s independence, sovereignty and territorial integrity. As first steps, the Minsk Protocol and Memorandum, as the only commonly agreed framework, need to be fully implemented without further delay.

It is clear that little can be achieved without Russia’s genuine commitment and constructive engagement. Russia needs to assume and exercise its responsibilities. The inflow of weapons, equipment and troops from across the Russian border must be halted. Equally, we call for the withdrawal of any illegal and foreign forces, mercenaries and military equipment from eastern Ukraine.

A lasting political solution requires also stepping up the political and economic reforms in Ukraine. I am confident that the new Parliament and the new Government in Ukraine will resume the reform process at full speed. The European Union will continue to support Ukraine in its efforts and calls for the resumption of a genuine national dialogue.

This year’s OSCE Ministerial, the Chairman reminded us, is very different from previous ones. Russia’s illegal annexation of Crimea and Sevastopol and destabilising actions in eastern Ukraine have seriously violated the basic OSCE principles and commitments, as enshrined notably in the Helsinki Final Act and Paris Charter. This is the larger issue we have to address today and tomorrow.

We do not need to renegotiate these principles and commitments or develop new ones to address the current crisis. The existing principles have provided a solid cornerstone for European security for many years and they continue to be valid. They are, in fact, not negotiable, including the principle that borders are inviolable.

The erosion of trust we are witnessing today can only be overcome by restoring respect for the basic principles of the OSCE and by genuine, open dialogue. I hope everyone will be ready to seize the opportunity of this Ministerial to start a process in this direction.

The crisis in and around Ukraine is not the only conflict on our agenda. It is also important to achieve tangible progress in the resolution of the protracted conflicts in Georgia, the Republic of Moldova, and of the Nagorno-Karabakh conflict. Time is not on the side of peace, and we know that very well.

Next year we will see the 40th anniversary of the signing of the Helsinki Final Act in 1975. The Helsinki+40 process remains an opportunity to address the crisis of European security and to seek common ground on the way forward. But there will be little cause for celebration next year if the basic principles of the Helsinki Final Act, the very document we will be commemorating, continue to be seriously violated. We hope that the Panel of Eminent Persons can contribute to re-launching a genuine dialogue.

Our discussions, Mr Chairman, here, under your chairmanship for which I want to thank you once again, provide an excellent opportunity to begin a process towards renewed respect for the basic principles underpinning security in Europe. The OSCE is, by definition, the forum for dialogue on European security and we should never underestimate its importance. I am confident that we all fully understand the relevance of our individual and collective responsibilities.

Thank you very much.”

As of September 29, at least 4,035 people have been killed in eastern Ukraine and 9,336 have been injured, and according to official figures as of 28 November, 490,046 IDPs have been identified by Ukraine’s State Emergency Service. The majority (96 per cent) come from the eastern regions of Ukraine.

On 21 March 2014, the OSCE decided to deploy a Monitoring Mission of civilian observers to Ukraine. The Mission has been deployed following a request to the OSCE by Ukraine’s government and was agree by all 57 OSCE’s participating States.