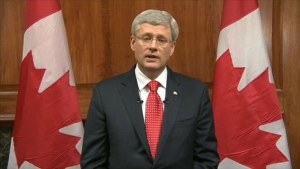 Prime Minister Stephen Harper said Canada would not be intimidated by this ‘terrorist’ attack – http://www.dailymail.co.uk/

(by Mark Kennedy – http://ottawacitizen.com/)-
Prime Minister Stephen Harper declared Wednesday evening that Canadians will not be “intimidated” by the terrorist attacks in recent days that have left two soldiers dead and led to unprecedented violence and chaos on Parliament Hill.
Harper delivered his message in a televised address to the nation, recorded from an unidentified location, after a day of drama in the nation’s capital.
“Fellow Canadians, in the days to come we will learn more about the terrorist and any accomplices he may have had,” Harper said of the attacker who was killed after he stormed the front door of the Centre Block and ran down the building’s historic Hall of Honor while MPs met nearby.
“But this week’s events are a grim reminder that Canada is not immune to the types of terrorist attacks we have seen elsewhere around the world.”
Harper said Wednesday’s event’s marked the second time this week there had been a “brutal and violent attack on our soil.”
On Monday, Patrice Vincent, a 53-year-old warrant officer with the Canadian Armed Forces died after being struck by a vehicle the previous day in St-Jean-sur-Richelieu, Que.
On Wednesday, the chaos began when Cpl. Nathan Cirillo, who was standing guard at the National War Memorial, was killed by a gunman. The attack then moved on to nearby Parliament Hill.
Harper said the thoughts and prayers are now with the families of the two soldiers who were slain.
“We are also reminded that attacks on our security personnel and our institutions of governance are by their very nature attacks on our country, on our values, on our society, on us Canadians as a free and democratic people who embrace human dignity for all,” said Harper. 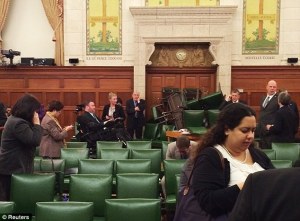 People inside the Conservative Party caucus room blocked the door with a stack of chairs – http://www.dailymail.co.uk

“Let there be no misunderstanding. We will not be intimidated. Canada will never be intimidated. In fact, this will lead us to strengthen our resolve and redouble our efforts and those of our national security agencies to take all necessary steps to identify and counter threats and keep Canada safe here at home.”
Similarly, the prime minister said the attacks will strengthen the government’s resolve as it works with Canada’s allies around the world.
He said Canada will continue to “fight against the terrorist organizations who brutalize those in other countries with a hope of bringing their savagery to our shores. They will have no safe haven.”
Earlier this month, Canada joined the U.S.-led coalition with an aerial combat mission of up to six months to battle the Islamic extremist organization known as ISIL.
“While today has been without question a difficult day, I have every confidence that Canadians will pull together with the kind of firm solidarity that has seen our country through many challenges,” said Harper.
“Together we will remain vigilant against those at home or abroad who wish to harm us.” 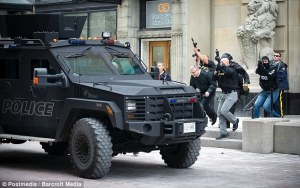 After Harper’s address, NDP Leader Tom Mulcair delivered a televised speech in which he said Canadians will be united.
“Today the peace of our nation’s capital was shattered by an act of hatred and brutality, a cowardly act designed to strike at the heart of our democracy, at the heart of who we are,” said Mulcair.
“In this moment, Canadians are unified in grief and stricken with disbelief. Canada is shaken today but we shall not waver. We woke up this morning in a country blessed by love, diversity and peace, and tomorrow we will do the same.
“These acts were driven by hatred, but also designed to drive us to hate. They will not. We will stand up and we will stand together. We will persevere and we will prevail.”
Liberal Leader Justin Trudeau said he was “deeply saddened” by the day’s earlier events “and unreservedly condemn these brutal and heartless acts of violence.” 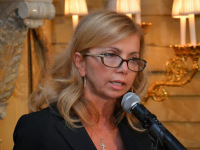 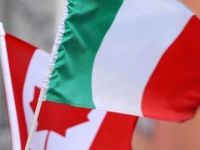 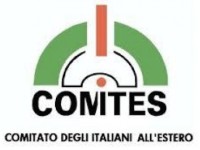