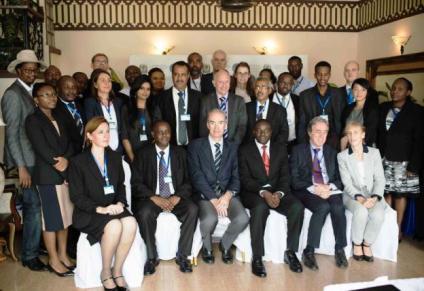 From 2 to 4 December, prosecutors from around the Horn of Africa and Western Indian Ocean region
gathered in Dar Es Salaam, Tanzania, for the Third Regional Conference of Prosecutors dealing with Piracy and other Maritime Crime. They were joined by key international players working on capacity building.

The event was co-hosted by the Tanzanian Director of Public Prosecution Office and the EU’s Regional Maritime Security Capacity Building Mission in the Horn of Africa and Western Indian Ocean, EUCAP Nestor. The opening ceremony was attended by the Director of Public Prosecution (United Republic Republic of Tanzania), Biswalo Eutropius Kachele Mganga, as well as the Head of the EU Delegation in Tanzania, Filiberto Ceriani Sebregondi, and the Head of EUCAP Nestor, Etienne de Poncins.

In his opening speech, the EU Head of Delegation, Ambassador Filiberto Sebregondi said, “The EU is proud to have contributed significantly to curb down piracy in the Indian Ocean. This is part of a coordinated effort to stabilize Somalia, to improve maritime security at sea and to bring the criminal to justice. Today’s regional seminar of public prosecutors from the affected countries is an important step to strengthen their capacity to ensure the law enforcement.”

Participants – who included prosecutors from Somalia, Djibouti, Seychelles, Mauritius, Yemen, Kenya, Tanzania, Zanzibar – exchanged information on best practices, such as how best to gather evidence at sea for use at trial or exchange of legislation on issues related to jurisdiction. Informal networking between prosecutors of the region, including prosecutors from Somalia, means that when facing legal or procedural issues whilst prosecuting a maritime crime, they are able to contact regional colleagues to find how such issues are solved in their jurisdiction.

Effective evidence collection at sea”, arrest and transfer from sea to land, as well as developments in the prosecution of piracy cases and maritime crime which occurred in the last six months” were some of the topics discussed at the Conference.

Criminal activities at sea often have a transnational aspect. This is another reason why EUCAP Nestor supports the building of a regional network and promotes the cooperation among the countries of the region with regard to maritime security. Enhancing the capacities of prosecutors is fundamental to ensure the effectiveness of the maritime criminal justice chain.

Although piracy has diminished at sea in the Horn of Africa as a result of the EU’s as well as International and local engagement, “Pirates are still out there. They remain ashore ready to act given the opportunity. EUCAP Nestor’s objective is to strengthen infrastructure on the ground in order to help Somali and Regional Authorities identify them and dismantle their networks”, said Head of EUCAP Nestor Mission, Etienne de Poncins, when briefing the press ahead of the Conference.

Background
EUCAP Nestor is a civilian EU mission under the Common Security and Defence Policy which assists host countries in the Horn of Africa and Western Indian Ocean region (Somalia, Djibouti, Seychelles, Tanzania) in strengthening their capacity to ensure maritime security and in particular to fight piracy.