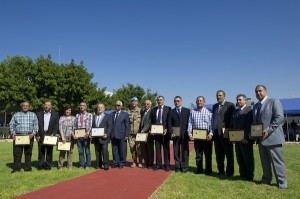 The United Nations Interim Force in Lebanon (UNIFIL) today celebrated the 68th anniversary of the founding of the United Nations in a ceremony at its headquarters in Naqoura, attended by representatives from the Lebanese Armed Forces (LAF), religious and municipality leaders.
During this international observance of the UN Day, UNIFIL Head of Mission and Force Commander Major-General Paolo Serra presented certificates of recognition to 12 Lebanese staff members who have completed 25, 30 or 35 years of service with the United Nations.
Marking the anniversary, UNIFIL peacekeepers representing 37 different national contingents held a ceremonial parade.
UNIFIL Major-General Paolo Serra and LAF Brigadier-General Mohammed Janbay, representing the LAF Commander laid wreaths at the UNIFIL Cenotaph in memory of the peacekeepers who have laid down their lives in the line of duty in southern Lebanon.
In a speech on the occasion, Major-General Serra said: “One of the fundamental purposes of the United Nations is to maintain international peace and security. For all of us peacekeepers, it is an honour to be part of the collective efforts to maintain security and contribute to peace in south Lebanon”.
The Force Commander attributed the success of UNIFIL’s mission to the talent and dedication of its civilian and military personnel, and importantly to the cooperation of the Lebanese Armed Forces as well as the support and goodwill UNIFIL has enjoyed from the people of south Lebanon.
“Central to our effort remains the Lebanese Armed Forces, a capable and reliable partner in the implementation of our mandate. This factor of stability gains further importance as we continue to maintain calm along the Blue Line in these highly turbulent times,” Major-General Serra said.
“Another source of our strength has been the people of south Lebanon, the bonds we share with them and with the local authorities. We are steadily building on this through the greater involvement of other UN partners and the Government of Lebanon at large in various projects and initiatives that benefit our host population,” he added.
The day is observed annually to mark the founding of the United Nations with the entry into force of the United Nations Charter on 24 October 1945.