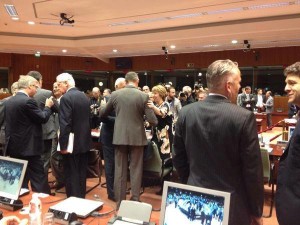 The Foreign Affairs Council meeting adopted the following conclusions on Iraq:
“1. The EU reiterates its firm commitment to Iraq’s unity, sovereignty and territorial integrity. It expresses its deep concern at the severe deterioration of the security and humanitarian situation in the country. Iraq is an important partner in need of strong support under the current challenging circumstances.
2. The EU is extremely concerned at the dire humanitarian situation and the massive displacements of civilians, mainly in the Northern regions as a result of the assaults by ISIL and other associated armed groups. The Ministers recalled the substantial efforts of solidarity that the EU and its Member States are making to provide humanitarian aid and welcomed the commitment of additional European funds as well as the mobilization of the European Emergency Response Coordination Centre and the activation of the European Union Civil Protection Mechanism at the request of the Iraqi government, to deliver assistance in kind including through the establishment of a humanitarian air bridge to northern Iraq adapted to the needs in the field. The EU underlines the need to take urgent action to facilitate, in accordance with international humanitarian law, access to populations in need and welcomes the efforts made by the US and other partners.
3. The EU remains seriously concerned about the deterioration of the security situation in Iraq and condemns in the strongest terms the attacks perpetrated by ISIL and other associated armed groups. The EU also condemns the atrocities and abuses of basic human rights, in particular when committed against targeted religious minorities and most vulnerable groups. Some of these acts, committed in Iraq and Syria, may constitute crimes against humanity and must be investigated swiftly so that the perpetrators are held accountable. The EU welcomes the US efforts to support the Iraqi national and local authorities in their fight against ISIL and recognises international and European responsibility to cooperate with Iraq in our common fight against terrorism.
The Council also welcomes the decision by individual Member States to respond positively to the call by the Kurdish regional authorities to provide urgently military material. Such responses will be done according to the capabilities and national laws of the Member States, and with the consent of the Iraqi national authorities. The EU will assess how to prevent ISIL benefitting from oil sales and condemns those funding the ISIL in contravention of UNSCR 1267 and subsequent resolutions. The Ministers invite the European External Action Service to ensure a stronger presence in Erbil.
4. The EU welcomes the nomination of Mr. Heider Al Abadi as Prime Minister-designate and expresses its continued support for the constitutional process. The EU is confident that the Prime Minister-designate will proceed with the formation of a new government as a matter of urgency and insists on the importance for it to be inclusive and able to address the needs and legitimate aspirations of all the Iraqi citizens. It calls on all political, religious and tribal leaders to contribute to this crucial effort to reinforce the credibility of the future government, giving, in particular to Sunni and Kurdish populations through a process of mutual engagement, new confidence in the democratic institutions and paving the way to a political solution of the current crisis.
5. The EU expresses its strong support for the United Nations Assistance Mission in Iraq (UNAMI) and calls on Iraq’s neighbouring countries and other partners to enhance cooperation and develop concrete actions to facilitate the long-term solution of the current crisis and fight against the common terrorist threat and for the preservation of a united and democratic Iraq”.

The Council adopted the following conclusions on Libya:
“The EU reiterates its condemnation of the increasing violence in Tripoli, Benghazi and elsewhere in the country and its devastating effect on the lives of the civilian population and is strongly concerned by the threats it represents for regional security and for the European Union. It recalls also EU support to the Libyan people in its transition. The EU calls on all parties involved in the hostilities to immediately cease all violence and to end the suffering of the civilian population, notably by engaging in a peaceful dialogue. The EU strongly supports the on-going efforts of the United Nations Support Mission in Libya (UNSMIL) to achieve an immediate ceasefire and to end the bloodshed and welcomes its partial return to Tripoli facilitated by Italy. The EU urges all sides to respond positively and without delay. The Ministers also acknowledged the concerted effort of the neighbouring countries in helping Libya overcome the crisis as well as their solidarity in dealing with displaced persons coming out of Libya.
The EU encourages the elected House of Representatives to playing its rightful role in leading efforts aimed at creating the dynamics for an inclusive political settlement embracing all political actors. The EU encourages the members of the House of Representatives to carry out their tasks in a spirit of inclusiveness, moderation and in the interest of the country, and calls upon all parties to support it. The EU commends the efforts of the UN Special Representative of the UN Secretary-General for Libya, Mr Tarek Mitri and welcomes the nomination of the EU Special Envoy for Libya Mr Bernardino León as his successor. The EU has consistently supported the central role of the UN in coordinating international efforts in Libya. The EU sees the appointment of Mr León as an acknowledgement of the EU’s engagement and recalls, in this regard, its efforts for a successful Libyan transition including through different support programmes to the Libyan people for security, economic recovery, health and protection of vulnerable groups amongst others. The EU underlines again the role of EUBAM Libya in assisting Libya with its border management challenges”.

The Council adopted the following conclusions on the Middle East (Gaza):
“1. The EU is extremely concerned about the fragile situation on the ground following the recent conflict in the Gaza Strip. It strongly welcomes the ceasefire which has been in place since 11 August and calls on all the parties concerned to agree on and abide by a durable ceasefire. The EU commends the considerable efforts and commitment of Egypt to broker this and earlier deals.
2. The EU remains concerned about the disastrous humanitarian situation in the Gaza Strip particularly the conditions of the displaced population, water supplies, electricity services, unexploded ordnance as well as destroyed and uninhabitable homes. The EU calls for increased efforts to facilitate, in accordance with international humanitarian law, immediate and unimpeded humanitarian access into the Gaza Strip including for humanitarian personnel and supplies, and for the mobilisation of humanitarian aid for the population of Gaza.
3. The situation in the Gaza Strip has been unsustainable for many years and a return to the status quo prior to the latest conflict is not an option. A durable ceasefire must lead to a fundamental improvement in the living conditions for the Palestinian people in the Gaza Strip through the lifting of the Gaza closure regime, and it must end the threat to Israel posed by Hamas and other militant groups in Gaza as demonstrated by rocket attacks and tunnel construction. All terrorist groups in Gaza must disarm.
4. In this context and subject to the requests of our partners based on the outcome of the Cairo talks, the EU reiterates its readiness to contribute to a comprehensive and sustainable solution enhancing the security, welfare and prosperity of Palestinians and Israelis alike. The EU will develop options for effective and comprehensive action in the following areas: movement and access, capacity building, verification and monitoring, humanitarian relief and post-conflict reconstruction and rehabilitation through international donor efforts including the eventual organisation of a donors’ conference. The EU is ready to support a possible international mechanism endorsed by the UNSC, including through the reactivation and possible extension in scope and mandate of its EUBAM Rafah and EUPOL COPPS missions on the ground, including the launch of a training programme for Palestinian Authority customs personnel and police for redeployment in Gaza.
5. In line with UNSCR 1860, the EU is prepared to contribute to arrangements that prevent illicit trafficking in arms and ammunition to the Gaza Strip and which can ensure the sustained re-opening of Gaza’s crossing points. The EU will also study options for an internationally-supervised mechanism to enable full access and movement through all Gaza ports of entry.
6. The EU recalls that the situation in the Gaza Strip has to be seen within the broader context of the Middle East Peace Process and the prospect of comprehensive peace where two democratic states, Israel and Palestine, live side by side in peace with secure and recognised borders. This remains our ultimate objective. The Gaza Strip constitutes an integral part of the territory occupied in 1967 and will be part of a future State of Palestine. The situation in the Gaza Strip cannot and must not be seen separately from the broader challenges and developments on the ground that continue to make the prospect of the two-state solution increasingly difficult to attain.
7. The EU has demonstrated its commitment to working with the government of Prime Minister Netanyahu and with the Palestinian consensus government comprised of independent personalities under the leadership and expressed commitments of President Abbas, which must exercise its full government responsibilities in both the West Bank and the Gaza Strip including in the field of security, civil administration and through its presence at Gaza’s crossing points. The EU reiterates that commitment today”. 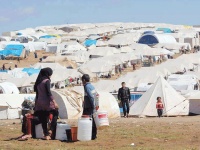